For now, the city looks to loans 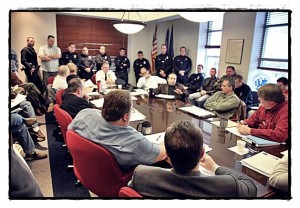 Bankruptcy or accept a state loan?

Lay off a dozen cops and firefighters?

Those were the choices the City Council analyzed, debated and wrung their hands over.

For over six hours.

But honestly, by second hour of the day-long ordeal, it was clear that City Manager Bill Cooper was leaning toward accepting a state loan.

Not that the city actually had a choice.

Yeah, that’s right, no choice at all. More like: take the loan or wait to go broke.

If the city decided to go without a loan, layoffs of cops and firemen would have been necessary – a possibility that had many residents on edge throughout last week.

By the end of Saturday, though, no cop or firefighter lost his or her job.

Let’s back up for a minute, for those of you who are unaware of what’s going on here. You see, several weeks ago, it became increasingly clear the city was going to be broke by the end of this coming January.

Broke as in, no money to pay city employees or any bills. Broke as in $3.3 million in debt.

So … the city asked the state if it could file for bankruptcy. That way, City Manager Bill Cooper said, the city could toss out union employee contracts and be able to purchase a less expensive health insurance plan.

Cooper said he has asked city employees for major contract concessions. So far, only City Hall employees have taken the brunt of cuts. The firefighters recently agreed to a wage freeze.

Cooper said that despite the concessions he did manage to get, he needed to go deeper. The only other alternative – which isn’t an alternative at all – was to lay off cops and firemen.

So, with no major contract concessions, Cooper asked state officials for permission to file for bankruptcy since cities cannot independently take that course of action on their own.

But the state said no. In fact, Gov. Jennifer Granholm said the state’s hands are tied until the city is absolutely broke.

Of course since this involves lawyers, others disagree.

As an alternative, the state offered the city four options to accept a loan. The loan – of about $2 to $3 million – would realistically only give the city another year before it runs out of money.

Cooper initially rejected the loan offer, however, saying it would only delay solving the city’s core financial problem. And on top of it, he had stressed, the city would be burdened with having to pay back a loan it can’t afford in the first place.

Despite that rationalization, the state stood firm and repeated it would not budge on the bankruptcy issue.

Now, speed up to last Saturday, and the City Council is holding a work session. Instead of holding the session in the council chambers, the meeting is held in a cramped conference room on the third floor of City Hall.

The room is packed, with a phalanx of uniformed – and armed – police officers along one side of the room and uniformed firefighters scattered throughout. Also in attendance are city hall employees, appointees and concerned residents.

It’s hot in the room and tensions sometimes swelled into sharp exchanges.

After three hours of going back and forth, the council took a break, came back for about another two hours and then took another break to go into a special council meeting.

In that meeting it was decided, still after much more debate, to direct City Manager Cooper to look into state loan options.

But there was also a decision to cut about $1 million from the city budget, which involved eliminating miscellaneous costs such as supplies and money held back to pay for unexpected retirements.

City code inspectors are also slated to be laid off, although their jobs might be saved if federal grant money for development projects can be tapped to cover their salaries.

Oh yeah, the city manager’s secretary was cut from full time to part time without any benefits.

Cooper told The Review the cut to his secretary will save no more than $30,000 and questioned the wisdom of that move.

He also said that despite having to figure out how to repay the state loan, the extra year will give him time to negotiate with city employees for contract concessions and if necessary, go into binding labor arbitration to try his luck there to get contract concessions.

Hamtramck has asked for proof of this allegation but Detroit has refused to provide any documentation. In the meantime, Detroit is holding onto $3 million that normally would have gone to Hamtramck.

(Editor’s note: Snyder has also refused to say what he plans to do about a number of issues.)

The year 2011 is looking like a pivotal one for Hamtramck – a city that has toughed out many challenging times in the past.