For once, a ‘plague doctor’ that you want to see 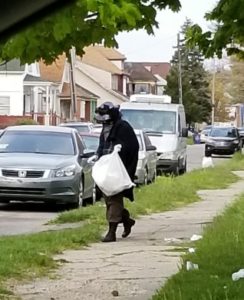 Someone in town who calls themself the “Plaguedoctor Trashman” can be seen picking up litter throughout the neighborhoods. Photo by Phill Kwik

By Alan Madlane
Hamtramck, in its best moments, has always been creative, original and often-times downright strange.
And this moment is right up there.
If you’ve been tooling around the city’s south side, in particular, you may have suddenly felt a bit of a chill, or had an eldritch sense of being out of time or place.
What could be the cause?
Perhaps you’ve sensed the presence of … the Plaguedoctor Trashman!
Dressed in a head-and-shoulders covering of mask, hat and cape, this steampunk-ish entity creeps silently about (in broad daylight, terrifyingly unexpected!), garbage bag in hand, stealing away with the city’s street refuse in some macabre ritual gone, well, right.
He-or-she’s even got his-or-her own Facebook page. And he-or-she’s a prolific poster.
They (let’s just go with “they” – and yes, it does say “TrashMAN,” but, we can’t fully assume yet, can we? There are pronoun police everywhere these days) do have their needs, you know.
Garbage bags, gloves, and hand sanitizer, they call out for. And when these needs are met, it’s gratitude that flows, not… anything gory.
Residents are having fun with the concept. Even the mayor has given a thumbs-up “like” here and there.
The concept of the plague doctor dates back as far as the mid-6th century, when the first documented European bubonic plague, dubbed “the Plague of Justinian,” took hold.
The costume, on the other hand, was invented by one Charles de L’Orme in 1630, and first used in Naples, Italy. It consisted of a light waxed fabric overcoat and a unique and creepy mask, with the eyeholes covered in clear glass and a long beak the wearer would stuff with herbs such as juniper berry, clove, camphor, mint, rose, myrrh and even ambergris.
Wonder how that worked out for the docs?
Usually, these doctors were second-rate practitioners desperate to make a living, even at risk to their own health.
Meanwhile, Hamtramck’s own Plaguedoctor Trashman has called out for others willing to join them in their rubbish ridding quest – costumed, or not.
Although without the costumes, it’s just, well, picking up trash, isn’t it? I mean, needed and all, yes, but.
Not nearly as interesting.
So, think twice before spreading your flyaway filth on the green, green grass of Hamtown, litterbug boys and girls.
You might be angling for a dream visit from a certain beaky apparition, who may well whisper not-so-sweet somethings in your guilty ear.
Clean up your act, on the other hand, and the only place you need to see ol’ P. T. is on the street – where he belongs.
Posted June 5, 2020