For parody polka rockers the Polish Muslims, it’s a homecoming 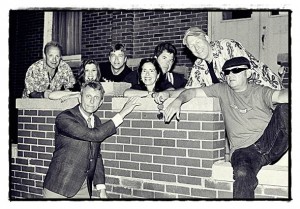 Perhaps you remember the first time you ever heard of Hamtramck’s Polish Muslims. Maybe it wasn’t that long ago, or maybe it was a very long time ago.

You see, this particular institution has been chugging along, delighting or perplexing crowds for almost three decades. Tonight (Dec. 17), at Paycheck’s Lounge in good old Hamtramck, the group will perform a show marking its 29th year in the business of entertaining you, the beer drinker.

Whether you can recall that first time, or whether it’s hazy, you probably wouldn’t be alone – even among band members. Frontman Ken Kondrat estimates that the band has performed approximately 450 to 600 shows – “about 20 a year, more or less, but definitely way too many!” — in their nearly three-decade career. Of those, a couple that stick out for him include the time they played Pine Knob in the late 80s (needless to say, for a crowd substantially larger than the usual Hamtown club would offer), and the time, also in that era, where they headlined a sold-out show for their faithful at St. Andrew’s Hall that left some fans still outside, unable to squeeze in.

Having formed from the remains of his former band The Reruns (whose surnames were cribbed from Golden Age TV characters, like “Haskell,” “Bodine,” “Ricardo” and “Fife”), and incorporating a couple of members of rival group The Cheaters, the Muslims were a popular musical parody act even slightly before “Weird Al” plied his demented 80s trade. Grounding the whole project in polka music, though, certainly gave their re-creations a beloved hometown flavor.

And the roots do run deep. Kondrat’s father was an organist and choir director at St. Florian’s before he passed away in the mid-late 70s, while his three sons will form one-half of the opening band Headlights Over Hills on this, their next big night. Kondrat’s voice swells with pride when he talks about his third generation musical progeny.

“They won the WRIF $10,000 Battle of the Bands competition this past September,” he crows. “They love the city, and it’ll be fun having them open for us.”

Kondrat and founding member Dave Uchalik will also perform in another musical project, The Earworms, the following night at the Northern Lights Lounge.

Queried on the current economic and political state of his revered Hamtramck, Kondrat demures.

“ I prefer to stay apolitical. Even though ex-Mayor Kozaren, for example, was a big fan of ours back in the day,” he laughed.

“Although I do love (current Mayor) Karen (Majewski), and (councilman) Tom Jankowski, for example, there’s nothing to be gained for us, as a band, to go off on any political rants.”

Given their longevity, what might the end look like for a band that once backed a commercial for the now-itself-defunct Highland Appliance (including with voice-over work) sometime back around 1992? Would they willingly let the group fade into the sunset, or prefer to have to be dragged squealing from the stage — or maybe simply collapse upon it?

“I guess, yeah, we’ll go until we have a total revolt of our fan base, or one of us drops dead up there,” he philosophizes.

Now streamlined down to a mere eight members from a former 11 (including constant core mates and ex-Reruns Kondrat, Dave Uchalik, and Al “Phife” along with former Cheaters member Mike Miller), there is always a chance the maturing hipsters may one day find there’s simply no interest left – but that day is hard to imagine, at least for now.

For one thing, there’s always the siren call of the Hamtramck Labor Day Festival, where folks traditionally line the front of the stage to follow the swells of their accordion-based boogie.

For Kondrat and his cronies, it’s a sight perhaps too dear to imagine it gone. And so the band plays on.

One Response to For parody polka rockers the Polish Muslims, it’s a homecoming