For some, fireworks are nothing to celebrate 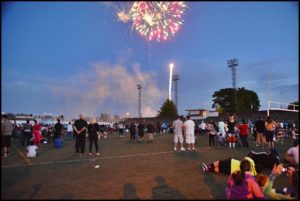 People are complaining nationwide about the eruption of fireworks. Hamtramck residents have also been complaining about fireworks being set off.

By Charles Sercombe
Hearing more fireworks lately?
You’re not alone, and neither is Hamtramck.
Various media reports say that there has been an explosion of fireworks in towns all across the county.
Things have gotten so bad in New York City that mayor has called for special crackdown on illegal firework sales. This June alone has seen a jump in complaints there of over 13,000. This time last year, there were 32 complaints.
Fireworks in Michigan became legal in 2012, but only during major holidays. Ever since then, there have been sporadic attempts to turn back the clock and make them illegal again because some people can’t stand the noise.
And pet owners complain that fireworks cause deep anxiety to their dogs and cats.
So, why the sudden increase in fireworks?
Folks are blaming it on both the quarantine and federal unemployment money.
Or in other words: Folks have a lot of time on their hands, and plenty of spending money.
According to one media report, the executive director of the American Pyrotechnics Association predicted it’s going to be a “banner year” for the sale of fireworks.
Locally, fireworks became noticeable when Eid was celebrated in late May.
Residents complained on social media about fireworks being set off throughout the night.
The city’s new, updated fireworks ordinance now allows fireworks to be set off during Eid.
Hamtramck Police Chief Anne Moise said that while there may be chatter on social media, the department has “only received a few calls in the last few weeks.”
Heather Martin of Pulaski St. had this to say about the phenomenon.
“It seems like more than just fireworks. A lot more M-80s, or bigger,” Martin said.
“Every day since Memorial Day weekend. Many folks in town have also commented on Facebook. Mostly they are tired of them. Kind of sounds like we are living in a war zone most nights.”
Fireworks in Hamtramck have always been hotly debated. Residents have spoken against them because the houses are so close together, and they worry that fireworks could easily start a fire on one roof, and then even quickly spread to another.
By the way things are going, this year’s Fourth of July holiday, which falls on a Saturday, is going to be one big bang.
Posted June 26, 2020