For some on Holbrook, road repair is just one inconvenience 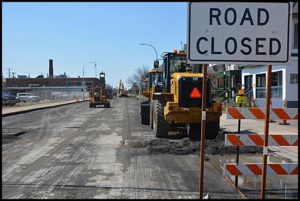 The reconstruction of Holbrook between Jos. Campau and Lumpkin is ahead of schedule, but the project has taken an unexpected twist.

By Charles Sercombe
First came the coronavirus pandemic and the shutting down of non-essential businesses.
Then came the closing of Holbrook between Lumpkin and Jos. Campau to rebuild the street and install new water lines.
These double-whammies have been the one-two punch for the owners of Café 1923.
Shannon Lowell, a co-owner, said that, although he can now re-open the café, the street repair has shut down customers from coming.
And now, there’s been one more blow.
The mail has stopped being delivered there.
“The only reason I know when my mortgage is due is through the mail” he said. “With the quarantine and closing, I’ve lost all track of time.”
But then it finally dawned on Lowell that he hadn’t been getting any mail. So, he went to the Caniff post office and was told mail delivery had stopped there because of the road construction, and that mail for those houses and businesses can only be picked up.
And not only does he have to come to the post office, but pick-up service is limited to Tuesdays only. There is a sign in the post office saying this.
“The post office couldn’t have put a notice in my mailbox?” Lowell pondered.
Prior to Holbrook being closed off, the city’s engineering firm sent letters to all the houses and businesses located in that section of Holbrook that their regular, daily mail would not – repeat, would not – be interrupted.
Apparently, the post office didn’t get that memo.
The Review called the post office, and we were told that someone who handles media inquiries would get back to us. By Thursday, the day The Review went to press, no contact had been made.
But sources told us that mail delivery was stopped because the conditions of the torn-up street were too dangerous for mail carriers.
And that was news to City Manager Kathy Angerer, who said a post office representative walked the street with a city official to review whether mail could be delivered, and the post office employee said there would be no problem making deliveries.
“We were told that before a shovel was in the ground,” Angerer said.
Angerer said it wasn’t a matter of lack of communication, but “no communication.”
At press time, Angerer was making inquiries with the post office.
As for the ongoing repair project, she said it’s ahead of schedule and should be completed by fall.
Posted July 24, 2020