For the Polish dead, a prayer and commemoration 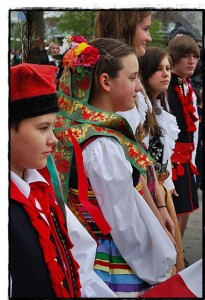 People began arriving at Zussman Park well before a flame was lit to honor the victims of a deadly plane crash last Saturday that claimed the lives of Poland’s President Lech Kaczynski, his wife Maria Kaczynska and over 90 political, military and religious leaders and crew members.

By the time Tuesday’s solemn program started a little after 6 p.m., there were hundreds of people in the park and on the street that carries the honorary name Lech Walesa Boulevard. Red and white Polish flags of all sizes were visible in the crowd. Teenage folk dancers and boys and girls in scouting uniforms lined the inner circle near the tent where guest speakers expressed shock and grief over the tragedy, sang national anthems in English and Polish, read the names of the victims and led people in prayer.

Among the guests were Hamtramck city and school officials; state and county leaders; and pastors from several churches, including Fr. Bogdan Milosz of Our Lady Queen of Apostles. After the program was completed, a procession made its way to Q of A, where he delivered a short memorial service.

The vigil was organized by the Piast Institute, a Jos. Campau-based research and social services center dedicated to Polish and Polish-American affairs. Other guests included Deputy Consul General Grzegorz Morawski, who came for the event from Chicago; former Detroit Mayor Roman Gribbs, a first generation American of Polish ancestry; and Piast President Thaddeus Radzilowski, who helped put last week’s crash and the March 1940 massacre at Katyn Forest into historical perspective. A ceremony to draw attention to the 70th anniversary of those horrific events was the purpose of the trip.

Kaczynski, the First Lady and the other Polish leaders were on a flight headed to Western Russia for the commemorative event. Over 20,000 Polish officers were executed by Soviet secret police at Katyn, about 12 miles west of Smolensk, where the president’s plane went down in heavy fog.