For These Boys Of Summer, It’s A Sweet Slide Home 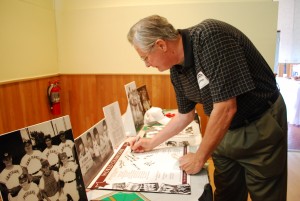 Doesn’t seem like a baseball game where the score was 11-0 going into the final inning would stir much excitement – but it sure did.

In fact it set the world of Little League baseball on fire, and brought instant fame to Hamtramck.

The game played out on Aug. 29, 1959, in Williamsport, Pa. The Hamtramck team had already walloped San Juan, Puerto Rico, 5-1, and Oahu, Hawaii, 7-1, to advance to the Little League finals.

Hamtramck went into the championship game heavily favored to win, and the youngsters did not disappoint, utterly dominating Auburn, posting one run in the first, six in the second, four in the fifth and one in the sixth.

But that was just the beginning of the excitement. Just as the last batter was retired, the 10,000 fans in the stands – including Hamtramck Mayor Albert J. Zak – jumped out onto the field to embrace the winners.

Back in town so many calls came to the Hamtramck Police Department from Hamtramckans seeking to know the score, the police sent two trucks with loud speakers around town announcing the win.

In the wake of being named World Champions, the team members were suddenly celebrities. They were featured on the Lawrence Welk TV show and honored at parades and banquets.

The latest banquet was held last Saturday at the PNA Hall on Conant, as Hamtramck called the players back home a half-century after the championship win to pay tribute to the remaining team members.

And the Little Leaguers weren’t the only champions honored. The 1961 World Champion Pony League team members also were honored.

There was a lot more drama in the Pony squad’s win over San Antonio, Texas. After nine and a half innings locked at 1-1, Tom Paciorek reached first base on a walk and advanced to second on a single by Art “Pinky” Deras. Then Reggie Ferrebee brought Paciorek home on a single and Hamtramckans were champions again.

The event was staged by the Hamtramck Recreation Department, the organization that put the world championship teams on the field in the first place all those years ago.

“I am so honored in having played a part in bringing everyone together,” said Craig Daniels, director of the Hamtramck Recreation Department.

“This is something I will always recall with utmost respect,” said Tom Niczay, superintendent of the Hamtramck Public Schools.

“This is truly remarkable,” added Titus Walters, president of the Hamtramck School Board.

Among the players attending was Deras, who dominated the whole world of Little League in 1959. Along with being a powerhouse hitter, Deras was a tremendous pitcher.

“Same Old Story: No-Hitter for Pinky Deras,” read a newspaper headline leading up to the championship.

Against San Juan, Deras struck out the first 17 batters who faced him. Against Oahu, he hit a grand slam.

Paciorek, who played on the Pony team and went on to play professional baseball, related some of his colorful experiences in the sport.

All the players received special trophies, and an especially emotional moment occurred when Alan Shulgon, now a member of the Hamtramck City Council, was presented with his trophy by his wife, Heddy.

Family members of the other championship players, coaches and managers and recreation department officials also attended.

And for a few hours, the decades disappeared and Hamtramck was on top of the world again.

(Greg Kowalski is Chairman of the Hamtramck Historical Commission.)

6 Responses to For These Boys Of Summer, It’s A Sweet Slide Home