For these honeymooners, it’s a trip back home 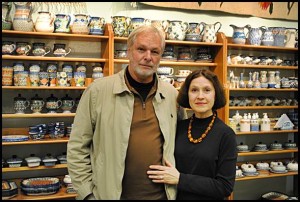 Former Hamtramck resident Antoinette Galloway came back to the city with her husband, Woody Galloway, for their honeymoon. The Review caught up with the couple at the Polish Art Center.

One of these days, I’m going to send you straight to… Hamtramck?

That was the gist of what former resident Antoinette Galloway (nee Horeski) told now-husband Woody Galloway about their post-wedding destination. And it’s exactly what she did.

After getting married on Oct. 18 at “7,000-feet high in the sky, on a mountaintop,” in New Mexico, the couple hopped a plane and headed to Hamtramck for a week of honeymoon bliss.

Antoinette Galloway was born in Hamtramck and lived here for 27 years before moving to Maui in 1982 and then eventually Sante Fe, New Mexico, where she met Woody. During her time in Hamtramck she lived at various locations, including in houses on Norwalk, Doremus and Comstock.

Her mother stayed in the city and lived in the Holbrook Senior Plaza until moving to an assisted-living facility last year at the age of 94. And though Antoinette and Woody visited her every six months or so while she lived here, the city still had a special pull that brought them back for their honeymoon.

“We could have gone anywhere,” said Antoinette, a lead concierge for the Four Seasons in Sante Fe. “But we chose to come here. There’s just something special about Hamtramck.”

“I’ve never seen so many beautiful buildings in one area,” he said. “St. Florian Church is just amazing.”

6 Responses to For these honeymooners, it’s a trip back home