For this musician, Hamtramck has a special place in his ‘heart’ 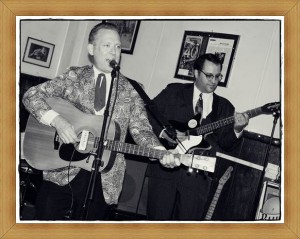 By Mike Murphy
Special to The Review

Almost everybody has heard about California girls, but Michael Hurtt and The Haunted Hearts have a special thing when it comes to Hamtramck gals.

The Haunted Hearts will make their fourth consecutive appearance at 3 p.m. Sunday (Sept. 4) at the annual Hamtramck Labor Day Festival.

Apart from band members’ expectations of once again having a roaring good time at the festival, the Haunted Hearts will also be packing their latest single, which features a tip of the hat to Hamtramck and its women, called “My Hamtramck Baby.”

Haunted Hearts leader Michael Hurtt said the group wanted to record “My Hamtramck Baby,” which was first released in 1956 by Detroit area country and hillbilly music songwriter Ray Taylor and his Alabama Pals, before anyone else got to it.

Asked why he thought Taylor came up with a song about a Hamtramck woman, and why in 1939 the York Brothers paid a similar tribute with “Hamtramck Mama,” Hurtt said the evidence is visible to anyone with eyes that see.

The group plays the northern United States infrequently since three of its members live in New Orleans, the city where the band was formed. Still, Hurtt and The Haunted Hearts have managed to make Hamtramck a regular stop on the group’s annual Midwest tour, which this year will take them to better than a handful of Midwest cities, including Chicago, Cleveland and Milwaukee.

For South Bend, Indiana-born Hurtt, not only a musician but a writer and music historian dedicated to bringing attention to some of Detroit’s long ago-buried songs and musical artists, the motive to reintroduce a country/rockabilly chestnut like “My Hamtramck Baby” is part of a larger love affair with the musical legacy of the Detroit area.

In his early 20s, Hurtt moved from South Bend to New Orleans, the city where the Haunted Hearts were formed, but he kept an eye fixed on Detroit, which he first visited in 1989 and where he first connected with like-minded Detroit musician Freddy Fortune, then fronting a group called the Covingtons and now heading the newly-formed Sin-Bads.

Not without a bit of irony, it was Fortune — brandishing a tape compiled by Detroit record store owner and well-respected Detroit music aficionado Tony Fusco — who first introduced Hurt to Detroit’s Fortune Records, a very prolific but now relatively unknown record label formerly located in the heart of Detroit. At that point, Hurtt said his love affair with Detroit-area music became a full-blown obsession.

“Quickly from there on, it was Fortune — and all at once — through this tape Fusco made. It had a lot of songs on it that we do now,” Hurtt said.

Throughout the 1950s and into the 1960s, Fortune Records maintained a highly eclectic roster of artists, and the label released everything from the country and rhythm and blues sounds that gave birth to rock and roll to rock and roll itself, and to the music of the many ethnic groups then making Detroit their home.

And while it may have taken Hurricane Katrina to finally plant Hurtt in Detroit, his musical spirit seems to have made the journey north long before the rest of his body arrived in the city and he took up what has become a lasting residence in Detroit.

He said he was keenly aware of the some of the drawbacks associated with living in Detroit area, but he did not seem to regret making the move.

“It was kind of like a Mecca for me,” Hurtt said. “And when I did come here, it was everything I expected and more.”

Since moving to Detroit, Hurtt has written numerous articles for publications like Detroit’s Metro Times and England’s widely-distributed Mojo Magazine. Many of those articles shine their spotlights on underappreciated or little-known Detroit artists, songs, and record labels.

It wasn’t like Hurtt did not have to do some digging for the Detroit gold that he has brought to light, but he said he did get a tremendous amount of help and support from some local music lovers who were well-versed in the sounds of Detroit.

One Hamtramck couple, Sandra Kramer and the late Jim Shaw, was particularly generous when it came to sharing their apartment as a listening space and also sharing Jim’s formidable knowledge of local music, which spanned the decades.

“They just turn you onto stuff,” Hurtt said. “And pretty soon you know more than you ever thought you would. They were so supportive.”

The first Haunted Hearts album, recorded in Louisiana shortly after Katrina hit and before Hurtt made his move to Detroit, contains three songs that originated in the Detroit area. True to form, the Haunted Hearts first single contains another Detroit offering. Hurtt said his dream of one day releasing an entire album full of unearthed Detroit sounds is coming closer to reality.

Hurtt, who describes the Haunted Hearts as his “long-distance” band and also heads a local group called the Party Stompers, which regularly yanks Detroit hillbilly and R & B sounds into its repertoire, said there’s something special about playing Detroit music in the Detroit area.

“It feels good to play this music where it was made, just to remind people that it existed,” Hurtt said.

The official record release for the Michael Hurtt and the Haunted Hearts single featuring “My Hamtramck Baby” and “I Wonder If You Wonder” will be held on Saturday Sept. 3 at P.J’s Lager House in Detroit.