For this runner, not even a catastrophic accident can keep her down 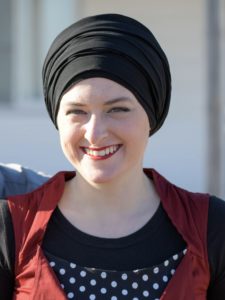 Amanda Jaczkowski’s active sport life came to an abrupt halt two years ago when a truck struck her while she was riding her bike in Detroit. She has since made an amazing recovery.

By Alan Madlane
Amanda Jaczkowski’s story is a fairly amazing one.
On Tuesday, July 25, 2017, she was riding her bicycle on Third Ave. in Detroit, making a right turn onto Temple St., when she was essentially run over by a truck.
Needless to say, her active life came to a grinding halt, in favor of 85 days of hospitalization for 17 broken bones among other injuries, requiring 22 surgeries to this point to try to set things straight again.
Now recovered to an amazing degree, she is planning to run in this month’s upcoming Free Press International Half Marathon (more info below on that), fulfilling an ambition from 2017 that was put on hold.
We caught up to Jaczkowski, who lives in Hamtramck, by email, and she provided interesting answers to some questions about her past couple of years for our readership.

The Review: It’s an ambitious thing to run any marathon, or half marathon for that matter. How have you trained, and what have you done since your accident, to get you ready for this?

Amanda Jaczkowski: I’m in physical therapy four hours a week at Rehabilitation Institute of Michigan (RIM) at the DMC campus, and have been working with these trainers and therapists for over a year now.
I ride my bicycle any chance I can get, play Pokemon Go, and go on long, long walks with my mom at Belle Isle a couple days a week. It has been a long journey – I was still using assisted walking devices until mid-winter.

Review: What do you remember about the accident? Have you spoken with anyone since who helped you on that terrible day?

Jaczkowski: I remember thinking how beautiful of a day it was, and how excited I was that it was a Tuesday and I was going to get lunch with my cousin, and then also enjoy Taco Tuesday with friends after work. Missing Taco Tuesday became the long-standing joke of my hospitalization.
Aside from doctors, nurses, and medical students, I haven’t spoken to anyone who helped me that day. I do have a very close relationship with one of the medical students (now a Resident), and two of the doctors who helped me early on. There are multiple nurses and PCAs (Patient Care Assistants) that I exchanged numbers with after I was discharged, so that I can keep them up to date on my progress.

Review: What were the biggest physical obstacles to get through in getting yourself back to relative health, to the point where you could undertake such a strenuous activity?

Jaczkowski: Well, I was bed-bound for over two months, and had even my non-injured muscles atrophy. I had extensive bone, skin, nerve, and circulatory damage. I lost over 10% of my body weight. Some things had to heal enough before fixing some other things, and simply building muscle mass back up has been a long journey.
What we really have been focusing on over the past year is core strength and my walking, so that I can not only walk without a limp, but also maintain that for a distance (it is nowhere near perfect, but the progress has been incredible).

Review: Out of all the things you could have chosen to try or do, why running a half marathon? Were you a runner before the accident? Was there something specific about the nature of this challenge that “called” to you?

Jaczkowski: I certainly was a runner before the accident.
I’ve never been one to sit still – you could always find me at the soccer field, running, riding my bicycle, dancing, or doing pretty much any other activity. I’ve done a plethora of 5k and 10k runs since high school, but in 2016 I trained and did the Detroit Free Press International Half Marathon.
I was signed up to do the CRIM in Flint and the Detroit Free Press Half Marathon again in 2017, but my accident prevented those from happening for me. I was volunteering at the Detroit Free Press Half Marathon last year, at the United Way for Southeastern Michigan water station, and watching the runners and walkers go by solidified my decision – I was going to do it again.
When I finally talked to one of my trainers and to my physical therapist at RIM, one of the trainers volunteered to accompany me. And so there we have it, a lofty goal and the means to accomplish it.

The Review: Is this a one-time thing, or do you plan to keep doing it if this goes to your liking? Or might you try other types of physical or mental challenges?

Jaczkowski: I’ve had all sorts of lofty, mildly absurd goals throughout my recovery.
I’m a capo (chant leader) for the Northern Guard, the independent supporter group for Detroit City FC. We stand on step ladders to lead the crowd, and so my December 2017 goal was, “I need to be able to stand on a step ladder for approximately 90 minutes straight by May.”
My therapist was a little confused, but then I explained the context. She was still confused, but we created a plan of action, and then accomplished it.
I did a 5k in July 2018, shortly before the one-year anniversary of the accident. My December 2018 goal was to be able to polka by March. And again, RIM therapists and trainers were (a little less confused, and) willing to make a working plan to get me to that goal.
The decision to do the Half Marathon is kind of coming full-circle for me, and is really the height of my recovery. It’s really a closing of the loop – I had intended to do it in 2017, so it’s just been deferred a bit. I don’t think I’ll do it again, but I won’t say “never.”

Review: What kind of support system have you had, in terms of family, friends or even pets, to help you in this journey?

Jaczkowski: There have been a lot of inspiring people in my life, but one of the biggest pushes to get better quickly was that my grandma had been diagnosed with terminal cancer shortly after my accident and wasn’t expected to make it until Christmas (2017). As soon as I was cleared to fly, I went down to Louisiana, and sure enough — she was waiting to make sure I was OK.
My family and friends definitely rallied around me. I had a lot of open skin, so was restricted to six visitors (my five immediate family members, plus a friend), who were all I saw in person for months. I had friends who would make signs (of course, about tacos) and stand outside the hospital so I could see them.
I had people across the world sending cards and words of well wishes – one of the most notable was a signed card from the players at Glentoran FC, a team that had come from Northern Ireland to play DCFC a few years back. The soccer community (all over the US) came through solid. Basically, everyone I’ve ever come in contact with, even by degrees of separation, was pulling hard for me to recover.

Review: That’s amazing. So, what is your connection to Hamtramck? Were you born here, or did you move here somewhere along the way?

Jaczkowski: My family came to the U.S. in the early 1900s, and was a part of the old Poletown community. We’ve had five generations have sacraments made at St. Hyacinth, right across I-94. When I was a kid, my grandparents still lived in Hamtramck.
I’m here with a lot with friends, some old family friends (Hi, Uncle Tony!), and activities. I always wanted to settle down here, and was actually in the process of buying a house when the accident happened. I finally bought a house here in 2018, and now love every minute of living in it.

Review: How did the accident impact you, in terms of the unfathomable bills that must have come from all the surgeries and so on? Are there, or were there, legal cases that might help (no details necessary)?

Jaczkowski: The fact that a bicycle is considered a road-legal vehicle and so the accident was covered under auto insurance really helped. This is one reason I have no problem with the no-fault and catastrophic fund, and I encourage people to look into how proposed changes would affect them.
I have never sat down and done the exact math, but the recent proposed caps ($250,000 per incident coverage) wouldn’t have even gotten me through the first few weeks, much less through all of the remaining surgeries and therapy that I’ve undergone.
I encourage people to speak to victims of accidents that have caused life-long changes like mine has, and support having full PIP coverage without caps.

Review: Feel free to add anything else about yourself: your other interests (and how those are going), other background, etc.

Jaczkowski: Other than what I’ve already mentioned, I am a Master in Public Administration student at Wayne State University.
I also am the Michigan Charter Representative for The Saber Legion, which is the world’s largest international “LED saber” (“LED saber” is the non-copyrighted, Disney-friendly word for “lightsaber”) combat organization. While I am a leader in the area for that organization, it can be frustrating that I am not able to compete due to injuries. I am slowly working on my strength, and have started to take classes again in recent months.
More than 26,000 runners from every state (also including the District of Columbia) and over 50 countries will gather in Detroit to take part in the annual Detroit Free Press/TCF Bank Marathons during race weekend Oct. 18-20, 2019.
This year’s running events will draw runners from countries as far away as Australia, Nigeria, Sweden and Taiwan, with over 4,000 participants expected to raise over $2 million for more than 45 different charities.
The race, which runs through streets of both Detroit and Windsor, Canada, is the largest running race of its kind in the State of Michigan, and is celebrating its 42nd year of competition. All event participants, including children, will be awarded a medal for finishing their event.
Registration for U.S.-Only events is available online through Oct. 14, 2019 at 11:59 p.m., and in person at the Health & Fitness Expo, while available entry slots last. Go to www.freepmarathon.com to register, or to find more details on all the race weekend events.
October 11, 2019