For this translation service, the world is at their desk 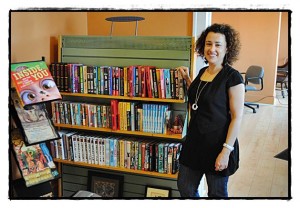 Jinny Bromberg, owner of Bromberg & Associates, poses near some of the business' reference materials.

One hears a lot of different tongues wagging on an average promenade down Jos. Campau in this town.
Thankfully, there’s a business here, well-equipped to sort it all out for us.

That business is an interpretation and translation service called Bromberg and Associates, located in the heart of Hamtramck at 3141 Caniff. We spoke with Jinny Bromberg, owner of the company and, herself, originally a Muscovite – that is, a native of Moscow in Russia.

Bromberg & Associates has actually been in business for 13 years, according to Bromberg. Begun, in fact, as a home-based business, they’ve now been in Hamtramck for the past 10 years or so, since 2002, and always somewhere on Caniff.

Since this past July, they’ve been in their new space at 3141 Caniff.

“It’s a better building,” said Bromberg, reached by phone at her office. “It’s bigger – we’re growing. It’s also got a better layout for our needs.”

Bromberg felt that Hamtramck offered the “most diverse” multi-culti environment, which “stood for what we believe.” She and her crew of, now, seven (all of them project managers or schedulers, she says – the actual interpreters and translators normally work from home) are happy to be here.

“It’s not some sterile office environment,” she said, referring to the typical suburban office setting.

But let’s back up a bit first.

Bromberg first developed her own fluent, lightly accented English back in Moscow as a student. Besides being a Certified Interpreter in Russian, she can, she says, “get by in Georgian and, to some extent, with Ukrainian.” However, should you need, for example, a birth certificate, she can translate one of those for you in 20 different languages.

She is quick with a list of the 10 languages that comprise the bulk of the work she deals with here in town: Arabic, Spanish, Chaldean, Russian, Polish, Albanian, Mandarin Chinese, Bengali, Punjabi and Bosnian.

Some of their work comes from out of town, too.

In fact, they offer not only walk-in service, but also telephonic and video-remote components as well. Clients find them mostly from, for example, Google search. Their in-house team, Bromberg said matter-of-factly, keeps them smartly competitive in the tricky world of maximizing their online exposure.

“Today, we had an inquiry about translating brochures from ‘American English’ into ‘British English,’” she said, noting the job’s diversity of requests.

Some of the requests are so obscure that finding an interpreter or translator can really pose a challenge, but it’s one they can almost always seem to meet, says Bromberg.

As to what may be going on for them in the upcoming months, she mentioned that they offer assessments for those seeking to pass state certification exams in, for example, the legal, health or military arenas.

These tests are difficult, she noted, and some are offered to people as few as two tries a lifetime. People are therefore already fairly skilled in their chosen language(s) coming in, and may perhaps just need to know the exact nature of the questions to expect on the exams.

The State of Michigan, she said, currently gives official certification as an Interpreter in only five languages: Arabic, Spanish, Russian, Mandarin and Vietnamese.

Thinking that it all sounds like work you might enjoy, in a growing field? You might be right. Bromberg suggests that you assess more than just the language itself when considering a language, or related group of languages, to study.

“Do you have an interest in, or aptitude for, engineering, or are you in that world? Then Mandarin Chinese would be an appropriate adjunct language” to study, she says. In any case, keeping abreast of world events is certainly always a good idea.

And isn’t it good to have a business in town that truly reflects, and indeed celebrates, Hamtramck’s ongoing multicultural reality?

Bromberg and Associates are located at 3141 Caniff St., on the north side of the street at Charest, east of Jos. Campau by a few blocks. Their phone number is (313) 871-0080, and their website is www.brombergtranslations.com.