Former police chief makes a comeback in a new role 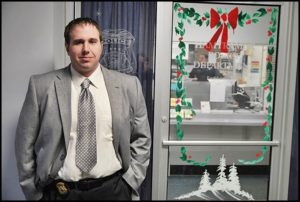 Former Hamtramck Police Chief Max Garbarino is coming back as a community liaison officer for the police department. He will be reporting to the city manager, not the current police chief. His return has stirred up controversy among some. File photo

By Charles Sercombe
Two employment contracts set off fireworks at last week’s city council meeting.
Councilmembers Ian Perrotta and Andrea Karpinski were alone in objecting to the contracts, which were submitted just before the council meeting started.
They both questioned why there was an apparent rush to get the contracts approved before they had time to examine the contracts.
Karpinski said she was “disgusted” by the process and accused others of conducting “backdoor meetings.”
First up was a contract to bring back former Police Chief Max Garbarino. City Manager Kathy Angerer created a new position for him to be Director of Community Safety and Services, with a salary of $85,000 a year.
The position is akin to being a liaison between the police department and the public.
He will serve as an “at will” employee with no expiration date in his contract. Garbarino will also have police powers, but will report to the city manager – not the police chief.
Perrotta reminded the council and public that Garbarino left several years ago “under a cloud” of controversy.
He agreed to leave as police chief following an investigation conducted by then-City Manager Katrina Powell.
The nature of the investigation was never revealed, and part of the separation agreement that Garbarino signed included a stipulation that neither he nor the city could talk about the reason for his leaving.
There was talk that before being fired, Garbarino had wiped clean his city-issued cell phone and possibly his laptop despite being told not to do so.
The agreement, however, can be undone if both the city and Garbarino agree to it.
In a WXYZ Channel 7 interview this week, Garbarino said his leaving had to do with “politics.” He also said that he and Powell “didn’t see eye-to-eye” on matters.
For the past few years, Garbarino had been working as an Eastpointe police officer. His start date in his new job is not yet known.
Councilmember Perrotta pointed out that Garbarino’s new position was not one that existed before, and questioned whether it is even needed.
He also lashed out at the city administration for not putting the two contracts in question on the agenda so the public could be notified ahead of the meeting.
The other contract is a modification of Angerer’s previous contract. She also works as an at will employee, but no longer has an expiration date on her contract.
She also has a new termination clause that will give her two-years’ worth of her salary if she is fired.
That will amount to $240,000, plus benefits, which would be covered for six months after her termination.
Her salary is $120,000 a year, plus $500 a month for her to maintain a vehicle, plus other perks as well.
While some in the community called the termination payment a golden parachute, it is not unheard of.
It was recently reported in the Detroit Free Press that Birmingham’s city manager, Joseph Valentine, will be paid $300,000 if he is fired.
Councilmember Fadel Al-Marsoumi told The Review that Angerer’s contract is worth it because she is doing a good job, and he wants to make sure to keep her here.
In both votes on the two contracts, Councilmembers Perrotta and Karpinski were in opposition.
Councilmembers Anam Miah, Abu Musa, Fadel Al-Marsoumi and Saad Almasmari, as well as Mayor Karen Majewski, voted in favor of the contracts.
Majewski normally doesn’t vote on most matters, per city charter, but does vote on employment contracts.
As for the Garbarino contract, Councilmember Karpinski questioned where the funding is coming from – especially in light of the city’s deficit spending this fiscal year.
Angerer said that Garbarino is being paid with funds from an unfilled position of deputy city manager.
Garbarino’s supporters on council noted that, while he was police chief, he made connections with the city’s immigrant community.
“He’s a very good friend of the community,” said Councilmember Musa. “If Max comes back, it will move the city forward.”
Dec. 6, 2019