Former Tigers player Ike Blessitt returns to ‘where it all started’ 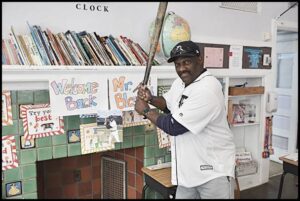 By Charles Sercombe
Former Detroit Tigers player and Hamtramck sports legend Ike Blessitt has been on a hot streak lately.
Blessitt has been the subject of recent media reports over an online fundraiser that’s still underway to help out with his financial needs – which is no small thing.
He also has had health issues – diabetes, a stroke, and he now has a prosthetic leg — and is also in need to critical house repairs.
Last Thursday, Ike, 72, took a trip down memory lane and visited his old elementary school, Holbrook, where he started his formative education years here in the Hamtramck Public School District.
Ike was joined by several others, including district administrators and teachers.
Standing in his old elementary school room, he posed for photos holding a baseball bat, and also stood next to a welcome sign the students had created.
As you can imagine, things have changed greatly since Ike was student decades ago, but not really too much. The fireplace is still there, adorned with Pewabic tiling, and the adjoining locker room is still in use.
“This is where it all started,” Ike mused.
After soaking up the surroundings, Ike turned to Acting Superintendent Nabil Nagi and said: “You’re part of this history.”
Ike graduated in 1967 after excelling in four sports here: football, track, basketball and baseball.
He was a star athlete in all of them, but baseball became his calling, despite offers to play football from the prestigious University of California, Las Angeles (better known as UCLA) in exchange for a full academic ride.
It was the Tigers who won out and, soon after graduating, he hit the minor leagues to sharpen up his skills – something that most players have to go through.
It was certainly better than being drafted to go fight in Vietnam, which a number of classmates were subjected to at the time.
Ike didn’t last too long with the Tigers after a falling out with then-coach Billy Martin. That’s a whole other story that we can’t tell, but trust us, it’s a doozy, and had he done the favor Martin demanded, Ike would have likely landed in prison for a lengthy time.
Despite that bumpy ride, Ike reminisced about the first time he got to step onto the field at Tiger Stadium – considered by many to be hallowed ground — where the likes of Ty Cobb, Babe Ruth, Joe DiMaggio and Lou Gehrig played – among countless other players.
“It was the highlight of my life. … Especially to play in your hometown.” Ike said.
His own heroes at the time, Al Kaline and Willie Horton, were right there with him.
“That was the biggest thrill in the world,” he said about playing with them.
Baseball was his life.
“I used to sleep with my bat,” he said.
Back to his school days. He admits to not being a good student, and even to having a gal pal do his homework for him.
He now advises students to consider a trade.
“I tell kids now to get a job as a plumber, car mechanic, painting – all these things don’t go away,” he said.
Ike has seen a lot of the world, but his heart is still here, and he lives not too far outside the city limits.
“Hamtramck is elite,” Ike said. “I’ve been all over the world, and I’ve been trying my best to get Hamtramck recognized,”
Baseball is still on his mind. He has been coaching youngsters at his home, and he urged Nagi to “get the young ones interested in baseball.”
Alas, baseball’s popularity isn’t what it used to be – especially in Hamtramck.
The favored sport now is soccer. The high school team has been excelling at the sport, which is popular among the Yemeni-American students.
“It should be known that soccer is here,” Ike said.

(To donate to the fundraiser set up for Ike, go online to: https://www.gofundme.com/f/Ike-Blessitt)