Forum set for candidates to speak 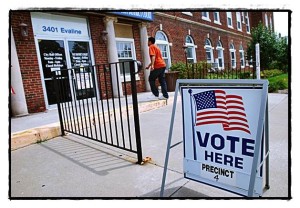 By Charles Sercombe
It looks like there will be a meet the candidates night after all this year.
But it won’t happen until the night before the election, Nov. 3, 6 p.m., at the Hamtramck Public Library.
The event is being organized by Fr. Lawrence Ventline and other local clergy members.
Ventline said he realizes the forum is last-minute, but he says he organized it after getting numerous requests.
“There’s a bunch of people who wanted it,” Ventline said.
The only local election is for school board, in which 15 candidates are seeking five seats on the board.
There are three regular termed seats that last for six years. The two other seats are to fill out the remaining terms of boardmembers who resigned. One seat has four years left, and another has two years remaining.
School Board President Titus Walters and long-time member Yvonne Myrick are stepping down.
Appointees Alan Shulgon, Eric Burkman and Evan Major are seeking to retain their seats.
Other candidates include: Mohammad Huda, Nasir Sabuj, Saad Almasmari, Dennis Lukas, Anam Miah, Ataur Khan, Anwar Almasmari, Cathie Gordon, Ripon Lasker, Omar Almasmari, Jackie Starr and M. Alwey Hussein.
Also on the ballot are the races for governor, U.S Senator, state Senator, state Representative and two seats on the state Supreme Court.
The format for the Hamtramck candidate forum is for local clergy to start the question and answer portion.
In other campaign news, the teachers’ union in the Hamtramck Public Schools is endorsing the following candidates for the regular six-year term: Alan Shulgon, Evan Major and Dennis Lukas.
For the term with four years remaining: Eric Burkman.
And for the term with two years left: Omar Almasmari.
It appears voters are off to an early start with over 600 absentee ballots already submitted to the City Clerk’s Office. The Michigan branch of Moveon.org has organized the Bangladesh community to vote by this method, said City Clerk August Gitschlag.

4 Responses to Forum set for candidates to speak