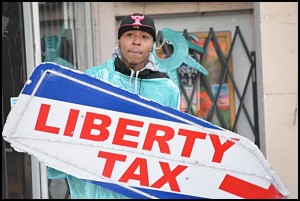 How do you beat the cold when temps hit the single digits and the wind chill goes into minus zero territory?

Keep dancing, said Shawn Smith, who was outside Amicci’s Pizza holding a sign directing people to the office of Liberty Tax.

He was referring to fellow sign holders across the street who were bouncing around.

“Those guys have earplugs and dance,” Smith said. “I’m too old to do that.”

So what’s the next best thing to do, beside not go out at all?

Well, maybe that’s easy for him to say, but for most folks it appeared they opted to stay inside, judging by the lack of people seen walking around.

This is the second week of brutal cold, which forced the public school district to cancel school on Monday, Tuesday and Wednesday. 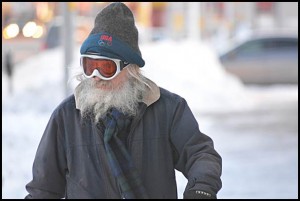 Need to ward off that wicked wind? Try a pair of goggles and grow a beard.

The unusual cold snap is being blamed on a “polar vortex” – air that normally circulates around the arctic that has been pulled down by a freak quirk of the jet stream.

Add in a record amount of snow that has fallen in January, and we’ve got ourselves one heck of a winter.

As for the schools, District Superintendent Tom Niczay said there have been six days cancelled so far, and the district has one more before being maxed out. With almost seven weeks to go before the first day of spring, chances are there will be at least one more snow day for kids.

Niczay said state education officials are trying to figure out how to make up for lost days. Normally a school would add on a few more hours per week or just go a few more days, but since so many districts have already gone over their maximum weather days, there could be a different solution.

Schools are forced to cancel classes when temperatures or wind chills reach -15 to -20 degrees.

While all of us need a break from the freezing temperatures, parents of students are likely at wits’ end from having to deal with kids being at home. With the school district’s Recreation Department also closed, parents can’t take their kids there, and doing anything outside in this extreme cold can be dangerous.

“You just stay in and read, do crafts and watch movies,” said Anne Hughes, who has a son in middle school and two daughters in elementary school. “It’s like a strange, little vacation.”

You may wonder, was this winter weather predicted by anyone?

Look no further than the 2014 edition of the Farmers’ Almanac, which came out last August. The periodical nailed what’s happening so far this winter.

And for this coming summer, get your umbrella ready. The Almanac predicts it will be extremely humid and stormy.

And here’s one more prediction by the Almanac about Sunday’s Super Bowl in New Jersey. The periodical says there will be a major storm hitting that area before and maybe during the game.