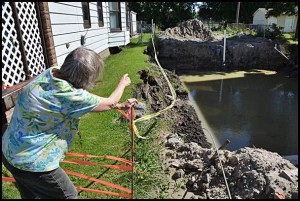 Kathleen Trusick of Goodson St. points to where her lawn was eroded away from last Friday’s torrential rainfall. Part of her sod fell down into a hole that had been dug where a house will soon be built.

Can anyone say “lawsuit”?

That’s what some residents might be talking about after last Friday night’s torrential rainfall that likely flooded hundreds of basements in the city.

Hamtramck has had a long history of basement floodings, and a few years ago it prompted a massive lawsuit filed by hundreds of residents. That lawsuit resulted in a multi-million dollar award that forced property owners to pay a special property tax.

Last Friday’s downpour may have been even worse compared to the storms that lead to the lawsuit.

Water was spilling over curbs on dozens of streets throughout the city during the storm, and made part of Holbrook impossible to drive through.

Worse, many households experienced backed up raw sewage in their basements.

Christine Komisarz said her concern grew as water kept rising in the street and up to the sidewalk at her Florian St. house.

“I thought I’d better go check the basement,” she said in an email to The Review.

“All I had to do is open the door. I could actually hear the water gurgling up with gusto through the floor drains. So, I took a few steps down the stairs and saw it bubbling up through the drains. I mean, bubbling with some force.”

It didn’t get better from there, Komisarz said. 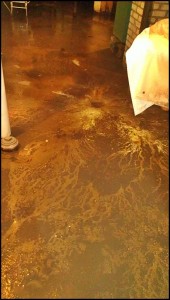 That’s raw sewage that came bubbling up in the basement of a Florian St. house.

“I went down Saturday morning. All the water had drained and left behind the most disgusting, black, slimy, filthy crap (probably literally) I had ever seen. Or at least that I could remember. I could not face that,” she said.

Instead of cleaning the raw sewage herself, she hired a company, which took a crew to wash down and disinfect. Fortunately, she had insurance coverage.

“The insurance company suggested I try to get my deductible back from the city,” Komisarz added.

Yeah, that may be what a number of other people are now thinking – at the very least.

The flooding was so destructive it eroded sod surrounding a new housing development next to a house at 2996 Goodson St.

Kathleen Trusick, who lives at 2996 Goodson, looked at the large section of lawn that fell down into the bottom of a housing site, about a 15-20 foot drop-off, and worried.

“What if my grandchildren were around this?” she said.

Trusick, who is a widower and on an extremely fixed income, is even more concerned if the erosion continues.

“I don’t have a basement,” she said. “What happens if I lose more?”

What is unknown is why the beginning stages of the new housing development was left open for weeks without further development.

The Review attempted to get a hold of Jason Friedmann, the city’s Director of Community & Economic Development, on Tuesday and Wednesday of this week, to find out who is responsible for the project, but several calls went unreturned, including calls to his cell phone.

It was later learned on Wednesday that Friedmann was fired on that day, along with two other city administrators, in a restructuring move by Emergency Manager Cathy Square.