Friendship House soldiers on in wake of budget cuts 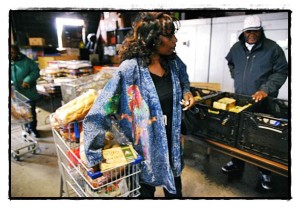 Despite a funding cut from the state, Friendship House has been able to still fill its food pantry.

You know times are tough, when your charity named ‘Friendship House’ gets a slap in the face from the State Department of Human Services.

Friendship House, a charity of the American Baptist Churches USA for 83 years now, had been receiving a regular grant from the state, through the DHS office, of approximately $12,240 annually. This year, with Gov. Snyder’s new cost-conscious regime in power at the state level, the months went by without any word from the state on the monies.

Finally, Friendship House called and asked the DHS what was up – why hadn’t they gotten any forms for this year’s grant process yet?

The unnerving answer, according to Friendship House Executive Director Linnea Berg, was to the effect of, “Oh yes – you’re not getting your grant.”

“We were stunned,” Berg goes on. While it may not seem like a huge amount of money, $1,000 a month goes a long way when you’re talking about food staples.

So, how are they still getting by?

The answer seems to be, surprisingly well. Berg explains.

“We’re one of the lucky recipients, out of huge number who apply, of donations from Forgotten Harvest,” she says.
That charity diverts large amounts of food to secondary charity stops, rather than allowing it to go off to landfills and rot.

“They have many requests from a variety of charities – a backlog, in fact,” Berg notes. “We’re one of the lucky ones.”
Forgotten Harvest’s trained quality control personnel funnel these still-good foodstuffs (including produce and canned products but also, perhaps surprisingly, meats) to the needy, via outlets such as Friendship House. Over one million pounds of food last year came in from Forgotten Harvest, with a tax value of about $1.78 million dollars, according to Berg.

Berg has also put in a request with the Kroger Foundation for assistance, and a number of other grants are being solicited as well. Then too, sometimes donations can come from less-expected sources. Even the fancier spoils from a country club can become fair game, for example — as happened on at least one occasion in the not-too-distant past.
“Yes, we ended up with a little bit of filet mignon to give away,” Berg laughs.

“A lot of times, we get offered breads or sweets,” she says, “but we worry about that, with all the increase in Type 2 diabetes, and with obesity rampant.”

Note, too, that they have a fundraiser coming up (and soon — specifically on Feb.16) at Mark Ridley’s Comedy Castle in Royal Oak. You can expect relatively family-friendly entertainment from Italian-American comedian Rocky Laporte, who’s had his own half-hour show on Comedy Central and has even appeared on Cheers, according to his website bio.

He’ll be appearing at the Palace soon as well, but here’s your chance to see him in a small club setting, and have it benefit charity to boot. Tickets are $25, with 80 percent of the total take to go to the charity — which is pretty darn good.

Watch out too for some upcoming food drives they’ll be part of.