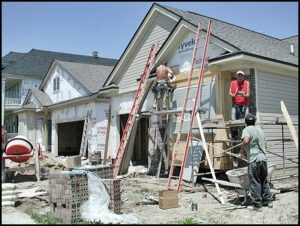 The last three houses will be built next year that will settle a longstanding housing discrimination lawsuit filed against the city decades ago. In total, 200 houses will have been built. File photo

By Charles Sercombe
By December of next year, the city will have an important milestone to celebrate.
All it will take is the construction of the last three houses to finally put an end to a housing discrimination lawsuit filed against the city back in the 1970s.
Recently, the city council accepted a $950,000 grant from Wayne County that will pay for the construction of the houses.
Work is expected to begin next year.
When the houses are completed, the city will have finally met all the terms in the settlement of a lawsuit filed against the city back in the 1970s. The lawsuit, named after one of the plaintiffs, Sarah Garrett, accused city officials from the 1960s of targeting primarily African-American neighborhoods for housing demolition.
That demolition was part of a national urban renewal effort to clear out dilapidated housing for redevelopment.
It took decades before a settlement was reached, but it would be years after that before various funding sources would step in to actually help in getting the housing units built.
Several years ago, it was thought that the city had successfully finished the last of 200 housing units the settlement called for, and there were even celebrations.
But guess what?
The attorney for the plaintiffs counted up the total number of housing units built, and the city was still three short of the 200 required units.
Unfortunately for the dozens of plaintiffs, most – if not all – had died by the time any of the housing units were built. Among those deaths was Sarah Garrett herself, the lawsuit’s namesake.
Federal Judge Damon Keith, an African-American who was celebrated as a champion of civil rights, oversaw the case for most if its history.
He also died before the lawsuit terms were fully carried out. He lamented that the length of time before any action took place was tantamount to “justice delayed is just denied.”
The city has since created a new park named in honor of Garrett. It is located on the I-75 service drive, just north of Caniff on the west side of the freeway.
Posted July 29, 2022