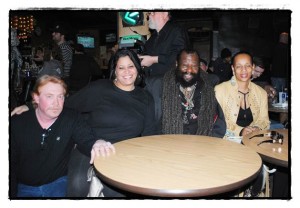 On a recent Saturday night, Kelly’s Bar was taken over by George – George Clinton, that is.

Well, he didn’t really take it over, but even without his trademark dreadlocks his presence was obvious among the usual suspects that make up the Saturday night blues crowd.

Clinton was at the bar attending the monthly meeting of the Detroit Blues Society, which was holding its awards ceremony for lifetime achievement in the industry. He was there to bring awareness to the important issue of recording artists’ royalty rights.

Over the last several decades, Clinton – who rose to fame with the Parliament-Funkadelic music collective in the 70s – has recorded countless songs and albums through a number of projects with various other artists. However, because the recording companies have retained the copyrights to the music, Clinton is now broke and faces homelessness.

It’s an issue that faces thousands of musical artists and their families, and one that is especially inherent in Detroit, where many recording artists were signed to unfair contracts that excluded them from money that was rightfully theirs.

In his pursuit to recapture his copyrights, Clinton has retained legal counsel and brought forth civil claims. But during the course of arbitration his attorney met with record company producers – without notifying Clinton – and after advising him not to attend that meeting, subsequently removed himself from the case two days before court.

Additionally, the attorney has placed liens on Clinton’s accounts, properties and all future settlements. Now being sued for his own music, he has turned into an advocate for music rights. He is currently working in conjunction with Congressman John Conyers and local resident Beverly Tran to bring the issue to the forefront of the national agenda, particularly through House Resolution 848, which is designed to provide parity in radio performance rights.

Though Clinton did not speak at Saturday’s meeting, he did perform an impromptu song. Being a spokesman is still something he’s getting used to, and his presence signaled the beginning of a new era of recording in which artists are not only appreciated for the work they do, but adequately compensated as well.

And while copyright issues will become more important in the coming future, Tran says that the past matters just as much.

“The immediacy of the matter demands attention as individuals are rewriting the history of the world through the methodical annihilation of national treasures which have left legendary black musical artists and their families destitute by claiming royalties without authorization or notification,” says Tran. “The removal of original names of legendary Detroit musical artists and their heirs from the record through the presentation of false documents is corrupting the recorded history of the civil rights movement.