Gas explosion rips apart JC building, but cause is unknown 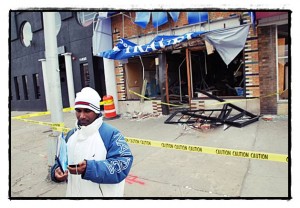 The buzz around town: Are we all going to blow up or what?

The short answer: No, we’re not.

Just because there’s been two building explosions in the last three weeks caused by leaking natural gas doesn’t mean Hamtramck’s old infrastructure is about to give up on us.

The latest explosion happened around 2 a.m. Friday at an office on Jos. Campau near Whalen St. Hamtramck fire investigators still can’t say for certain what caused the explosion, and an investigation is ongoing.

A few things can be ruled out: There was no sign of an illegal hook-up or a fixer-upper gone wrong. Also ruled out was a rumor going around town that it was caused by increased pressure as a result of DTE installing new gas lines on Jos. Campau.

Fire Chief Steve Paruk said internal gas regulators within the lines prevent excessive pressure. And after the explosion, DTE shut off gas to area businesses and then turned gas back on, business by business, to make sure there was nothing wrong with the delivery of the gas.

Paruk said there is an indication that the piping in the building may be at fault, but he declined to speculate further. He said the investigation may require digging below the surface.

As for fears that Hamtramck’s old-stock housing is vulnerable, Paruk put things into perspective. He said in the 27 years he has worked in the Fire Department, he has experienced four gas explosions, two from over 20 years ago, and now the two recent ones.

The explosion attracted wide media attention. The force of the blow-up caused the front window to fly across Jos. Campau deep into the parking lot of the former Clock restaurant.

The structure was also heavily damaged, with the ceiling collapsed and the rear portion of the side walls split apart.

Inside the office (the former Krakowiak Travel Agency), desks were overturned and walls were ripped apart. Damage also spread out to four storefronts next to the building.

Amazingly, a tenant in an apartment in the rear of the building where the explosion occurred was not injured. 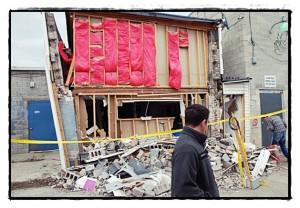 Despite the heavy damage, Paruk said the building can be repaired, at least the front two-thirds of it. The rear portion is another matter.

Elias Uddin, who operates a company in the building that specializes in immigration matters, insurance, tax preparation and driver’s training, said he left around 7 p.m. and did not detect an odor of gas. Neither did the upstairs tenant.

The blast occurred just about at closing time for bars. Lyman Woodard, the son of a Detroit jazz legend and the owner of Twisted Fix, a tattoo salon on Jos. Campau, said he was walking toward the building when it exploded right in front of him.

“If I were two steps closer, I would have been blown away,” he said.

We met up with Woodard around noon on Friday. He was taking a picture of the damage with his cell phone.
“I told my girlfriend about it, but she thought it was an April Fool’s,” Woodard said.

Hamtramck’s prior gas explosion occurred three weeks ago at a house on Norwalk St. In that case, the sole tenant living there had been making repairs to his stove, and had disconnected the gas line. It’s unclear whether the tenant failed to reconnect the line or reconnected it incorrectly.

One Response to Gas explosion rips apart JC building, but cause is unknown