Get ready to have some fun 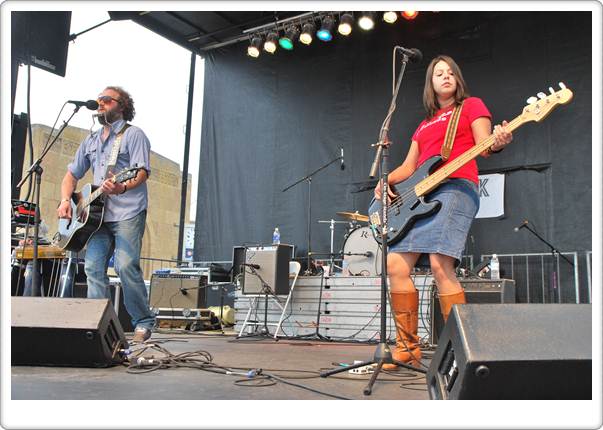 This year, maybe more than ever, it’s truly a grass-roots event. And once again, it’s a couple of locals who have dug in and refused to let another tradition die.

Riding in on the white horses were Hamtramck Library Head of IT Konrad Maziarz and Café 1923 Owner Shannon Lowell, along with their volunteer team. More on them in a moment.

“It’s like a wedding – when it’s the 11th hour, and all hell is breaking loose, all you can do is trust that the people you’ve chosen to help you keep it together are stable enough to be able to do just that – and we’re confident this group has done a great job,” Lowell said.

Asked who handled which aspect of the preparations, Lowell credited his team, going so far as to bring a list of their names into our offices.

But, in the end, it’s primarily Maziarz’s and Lowell’s baby.

On this year’s version of the poster, the festival is touted as a “Blue Collar Bash.”

“What’ll make all the difference is that the weather stays good – if it does, then we’ll do good. We have to hope that (the remnants of Hurricane) Isaac stays south of us,” he added.

He hopes that, when the smoke clears, they will have stayed on course in taking what he termed “the fiscally responsible approach.” Virtually all the workers have volunteered their time to make this thing work, better – they hope – than it even has in the past.

And while the carnival, the vendor tent rentals, and so forth, help keep the whole shebang from going too far into the red, the pair admit that it’s the beverage sales, specifically from the beer, which really makes the biggest difference in bringing in significant income.

Roll call #2: There’ll be Miller High Life and Miller Lite drafts available for $4, and Motor City Brewing Works Ghetto Blaster, as well as their special “Kolsch-style” brew, for $5. Bottles of Polish beer Tyskie will also be $5, as will Mike’s Hard Lemonade.

The festival starts on all three days, Saturday through Monday Sept. 1-3, at noon, conveniently the time that beer can also legally be sold.

So, have a cold one, take in some music, food, rides, silly contests, and have a ball. You know how it’s done, Hamtramck.

You can even hit the 11 a.m. Polka Mass on Sunday, to try to absolve sins both already committed, or perhaps yet to come.

The Hamtramck Labor Day Festival will be on Jos. Campau, extending from Caniff north to Commor, officially. If you need to get down here from the Ferndale and Royal Oak areas, a $5 day pass from the Detroit Bus Company will get you picked up and dropped off from either Gusoline Alley (Royal Oak) or Imperial/Danny’s Irish Pub (Ferndale) at 1 p.m., 4 p.m., 6 p.m. or 8 p.m., and you can still catch a ride back from the north end of the festival as late as 10 p.m.