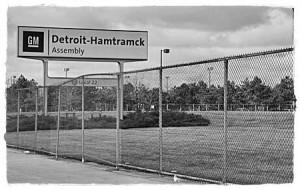 You’ve probably heard by now, but if you haven’t, last week GM announced it plans to hire 2,000 workers at its Poletown Plant.

Well, if you consider that Michigan lost over 100,000 manufacturing jobs in the last few years, the figure 2,000 is a mere drop in the bucket.

But there is a gain here for Hamtramck. Since part of the plant straddles into the Hamtramck side of the Detroit border, the city gets one-third of all taxes collected from the plant.

That includes income tax and tax on equipment in the plant.

City Finance Director Nevrus Nazarko said that while the income tax bump up will be small, the potential for new equipment needed for expanded production could produce a more significant windfall for Hamtramck.

GM also plans to install a field of solar panels in a portion of the plant’s sprawling grounds. That will mean an additional source of equipment tax revenue. GM hopes to provide its own energy for the plant.

So, while not a major income increase at this point, the return of some jobs – any jobs – is encouraging. But before that happens, GM plans to close down the plant for four weeks and lay off employees there.