Goods and Things, more or less 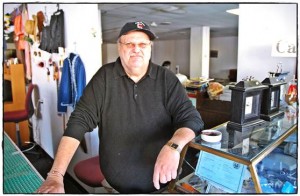 Born at St. Francis Hospital (now the City Hall building) here in town; a grad of the old Hamtramck High (now the Glory Market complex), Class of ’66; a former member of the Charter Commission; the city still courses through him, even though he moved out of Hamtramck about six years ago.

He looks a bit wistful in his new thrift store at the northwest corner of Jos. Campau and Caniff as he observes the hubbub resulting from the government’s in-store phone giveaway. It’s a Tuesday afternoon, and as the line for free phones moves briskly past his desk, a woman inquires about a coat on the wall.
Given a price, she shuffles off to ponder it from the deeper recesses of the large resale space – the former Campau Carpets & Linoleum Company. So, how’s business?

“I made $15 yesterday – all day,” he grumbles. “I thought this might be a good line to get into. Maybe I should have you put ‘Fire Sale’ in my ad.”

He’s kidding, but then there are times like that in the city for most everyone these days. He grouses that a competitor down the street is selling things for “two or three dollars.” Still, he keeps trying to drum up ideas to get business flowing more steadily.

“The City Council’s been doing a good job, but this town’s in bad shape,” Kapusniak laments.

So what does he think of their recently proposed ordinance (since defeated) that would have required all second-hand stores to record substantial information about any merchandise they receive?

“I blame it on the pawn shops in town. They never should have been licensed,” he sniffs.

For his part, he claims not to let anyone shady looking into the store, advising them to move on down the Campau line.

“They’re coming in here everyday,” he adds, and continues, “I won’t buy anything off of anyone unless I know ‘em personally.”

Asked to name the oddest item he’s been brought lately, he ponders a moment before answering in bemused question form, “Computers? A wooden ladder?” He shakes his head at the recollection.

The free phone queue shows little sign of abating as the afternoon drifts on. And yet, for all the people in the store, it’s not translating into any business for the resale shop, at least not yet.

In tough economic times like these, a business that sells used items for used item prices should have them packing the place. Meanwhile, signs adorn the building’s façade, indicating the space as for sale.

One thing that should generate some additional revenue is a nice selection of holiday items, most quite reasonably priced. Once in the store and looking, clearly the hope is that other items will be discovered, and purchased, as well.

For Kapusniak, as for so many local merchandisers, it can’t come soon enough.

2 Responses to Goods and Things, more or less