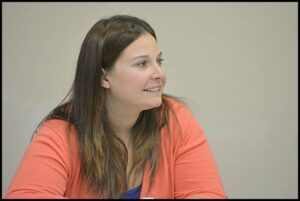 By Andrea Karpinski
It is not without careful consideration that I write this Letter of Resignation from my position as Hamtramck City Councilwoman.
Over the last seven years, I have learned a lot about myself, and more about Hamtramck politics than I care to know.
I have been involved in many things: Veteran’s Park renovations, Pope Park renovations, welcoming new businesses, saying goodbye to businesses that have closed, passionate arguments, sensible arguments, downright uncalled-for arguments, enlightening moments, proud moments, and completely disheartening moments.
There have been many ups and downs in the City of Hamtramck over the last seven years, and as an elected official I fought hard to do what was right for the city as a whole — for its residents, visitors, business owners and city employees.
During the last year, I did an incredible amount of soul searching on whether or not to continue in my role. I know that I was elected by the voters to do a job, a very thankless job at that.
However, I knew I owed it to the community to keep fighting for what was right. In the end, I have decided to resign, because I cannot keep fighting a losing battle.
While I always tried to make decisions based on the best interest of the community, my ideas were rarely regarded or respected by my colleagues.
I was born and raised in Hamtramck. I started my professional career in 2003, working for the City of Hamtramck as a part-time Building Clerk in the mornings and for the 31st District Court as a Parking Ticket Clerk in the afternoons.
I was hired full time by the city in 2004 and, although I left in 2011 to pursue a career elsewhere, in 2013 I decided to run for City Council.
Of the past 17 years, 15 have been spent dedicating my time and energy to helping the Hamtramck community.
My family has a legacy of public service for this amazing city; my grandfather and mother dedicated their careers to the community as well. Unfortunately, that legacy is now coming to an end.
While I promise to stay involved, I need time to spend with my family, and work to rebuild my broken spirit. The disrespect, constant fighting, name calling, personal attacks, lying, and lack of transparency on both the city council’s and the city administrator’s parts have not only broken my spirit, but are lowly destroying the city.
I hope that my resignation will open up some eyes, and encourage people to fight for what is right.
Lately, everything has been “majority/minority” and that is disgraceful. Instead, let’s work on what is best for the community as a whole, no matter your religious background, skin color, race, ethnicity, gender, sex, or age.
It seems really simple, but this current council and the previous council have really seemed to screw up that way of thinking. Unfortunately, the city manager and city attorney play into those games as well, instead of running the city based on knowledge, experience, and decency.
I do wish those remaining on council, and those that will come after my departure, will come to their senses and start running the city as it should be — solely on what is best for the community as a whole!!!
I apologize to those who voted for me, if you feel that I have let you down. I know most of you know how hard I have been fighting for what’s right, and believe I need to do what is best for me at this time, and I appreciate your understanding.
I will forever be grateful for your support and encouragement along the way. I would especially like to thank the city labor unions for their support, and I hope they know that I always had their backs.
COVID-19 has been tough on all of us, but one thing it has shown me is the importance of self-care, and spending time with my family. Both of which I intend to do.
To the city, county, and state officials, I really hope you start paying attention to what is happening in Hamtramck, and step in to offer guidance, support, and reprimand as needed.
Some Hamtramck officials are overstepping their power, and are not being good representatives of our beloved City of Hamtramck.
Posed Dec. 11, 2020