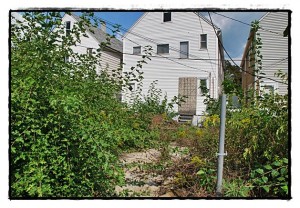 Anyone handy with a weed whacker?

First off, a big thanks goes to the folks who have e-mailed and phoned us with tips.

We promise we’ll get to all of them.

And now let’s talk about one of the folks who have e-mailed us.

Deborah Thorsell calls herself a “Concerned Citizen of Hamtramck,” and she’s particularly concerned about a house at 11411-13 Moran. It’s a two family house that’s boarded up.

From the front, it looks pretty ragged, but not something you’d pay much notice to as you walked down the street.

It’s in the back where things get nasty.

“While the lawn in front is kept up (because we cut it), the backyard is a veritable jungle. What started out as weeds have now become 6-foot trees. I actually call it ‘Sherwood Forest.’ Come see for yourself.

“Efforts to have the city, or whoever owns the site, clean it up have sparked no reply. This should not be!

“What has happened to pride and integrity in what we own, be it an individual or a major company?

We got a kick out of Deb’s phrase: “sparked no reply.” We’re going to remember to use that one.

Well, Deb, we looked into the property and the last owner on record was a couple who live in Grand Rapids. The house went into foreclosure, and it recently went up for auction through the county.

At press time, it was not known if anyone bought the house. The minimum bid for the house is set at $23,600 – which is probably what is owed in taxes.

Frankly, this house isn’t worth that much money.

Not in today’s depressed market.

The backyard, if you want to call it that, is truly a jungle, a mess of weed trees and yard waste.

What probably irks the neighbors is that most of the houses nearby are well-maintained. Heck, in the alley, someone built a lovely planter next to their garage.

Contrast that image with this standing eyesore.

So, what can the city do when no one really owns a house?

If the city sends a work crew to mow the lawn, it could put that charge on the tax rolls. But with no certainty that someone will eventually buy the house, the city could rack up quite a bill if it provided this service for all the abandoned houses.

Yet again, by not maintaining these houses, everyone’s property value will begin to drop.

See what a vicious circle it is?

May we suggest something?

We need to form a group of volunteers who will go to these properties and give the lawns a good weed whacking every once and a while.

Why depend on volunteers? Because our government – and just about all local governments – are too broke.

And now for a follow-up on past issues we’ve talked about. Remember that boarded up house on Alice St. we talked about? It’s scheduled for demolition, but the exact date isn’t known yet. Jason Friedmann, the city’s Director of Community & Economic Development, said he’s waiting for the gas and electric lines to be cut off. Once that’s done, the house will be ready for a date with a bulldozer.

We also received a very nice note from Camille Stock, who lives near an empty Whalen St. house that has become overrun with weeds and other plant life.

The house, at 2607-2609 Whalen, is in foreclosure, and whichever bank owns it has done nothing about maintaining it.

Camille is in her 80s and her husband, a retired Hamtramck detective, is in his 90s. The pollen from the weeds has caused them health problems. Camille has been begging the city to cut down the weeds, but those pleas have fallen on deaf ears.

It was our hope a volunteer or two would weed whack the yard, but, alas, no one has stepped forward.

Here’s what Camille had to say about things.

“Thank you for writing the nice article in the “Hall of Shame.” … It’s only the beginning of the second week. Still no luck. Let’s see how long it will take for the task to be done.”