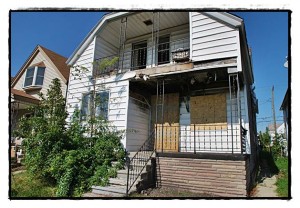 On Edwin St., something is very foul indeed.

Recently, we talked about one of those strange moments we have all experienced, when you suddenly notice something new or odd on a block that you have probably passed by hundreds of times.

A regular writer to our paper, Christine Komisarz, had one of those moments, too, when she was out walking her dog “Lucky.”

She was going down Edwin St. near her house when she looked over, and tucked in the middle of two nicely kept houses was a house that really doesn’t fit. In fact it doesn’t really fit anywhere, which becomes glaring when you look around and notice how nice the rest of the houses are on the block.

The house had been in a fire, and the front door has a piece of plywood nailed to it. Upstairs, the door leading to the small porch is wide open. If you look closely, the houses on each side of this house have been damaged by the fire, which happened several months ago.

It seems that almost every block has at least one of these cancers.

While I was taking photos of the house, a Polish-speaking women next-door opened her door and asked if I was with the insurance company.

I said no, and she said she spoke no English and retreated back inside.

I was left thinking: Has she been waiting for the insurance company, all this time, to take care of the damage to her house?

Last May, police officers arrested a man living in the house for income taxes he owed to the city.

The house was soon after condemned because – as officers told me — the inside of the house was covered in feces.

After we ran that story we got an angry call from either a family member or a friend denying the inside was feces-covered.

We don’t know what the truth is, but the house is indeed condemned and no one is allowed to live there.

A next-door neighbor, Tom Witkowski, said he had been trying to sell his house because the house in question was not only an eyesore, it stunk to high heaven.

Not surprisingly, he was having a hard time finding any takers.

All it needs is a little, ah, cleaning up.