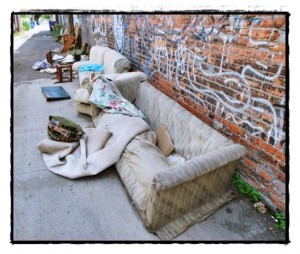 How many weeks will this pile of furniture remain here?

We’ll give the city some credit.

Yes, there are code inspectors working the streets and issuing tickets to people who allow their property to become a dump.

But when we see the same pile of garbage in an alley week after week, well, it’s time to do something.

So, let us introduce a new feature. It’s called “Hall of Shame,” and it will spotlight the worst code infractions we find out about. A big tip of the hat goes out to Marge Czarnik who first suggested this back in May, and also to Christine Komisarz who has been calling and emailing city officials about the various code violations she’s seen in her neighborhood.

Basically it boils down to this: there are certain residents who feel they are not getting their tax money worth when it comes to keeping the city clean. And they are equally fed up with residents who are too lazy to keep their property clean and free of household garbage thrown all over the alleys.

So, for our first spotlight on blight we didn’t have to venture too far. In fact, it was right down our alley, the Caniff-Trowbridge alley just east of Jos. Campau.

And there behind Paycheck’s Lounge is a large pile of stinky furniture and clothing and who knows what else.

Now, we’re not saying this came from the apartments above Paycheck’s because anyone could have dumped this stuff here.

The point is, though, the pile has been there for at least two weeks. Has anyone from the city noticed?

Well, if not, now you know, City Hall, where you can find a big pile of trash.

While there is no shortage of blight to feature, we would like to take suggestions from our readers. Folks, it’s time to draw the line on blight.

One Response to Hall of Shame …