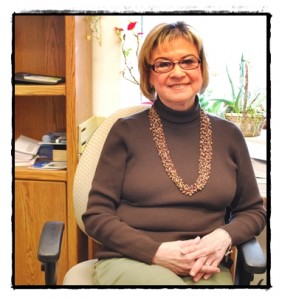 Who she is: Deb Nevinski, recently retired Administrative Assistant for Community & Economic Development for the City of Hamtramck

You recently retired from working for the City of Hamtramck. What was your last day? And do you remember your first day worked?
Well, my last day worked was Jan. 29. I started work with the City on Oct. 29 of 1973 — 36 years ago.

You ended up as the Secretary for the Economic Development Department. What other position(s) did you previously hold?
I started off in an entry-level position in the Housing Code Department in ’73. From there, I went to the Controller’s Office as clerical and reception. After that, I went over to the Hamtramck Public Library, again in a clerical capacity. There were actually two of us doing more or less the same job.

What types of work did you do at the library?
In addition to the usual clerical work, I worked the information desk, and regularly cataloged books. I even did some in-depth research for patrons.

And from there?
Back to the Controller’s Office a second time. This was in the late 70s, and working with a 70s computer system. We had four keypunch machines and two verifying machines between a staff of four total. After that, I was on to the Department of Public Works, where I did payroll for the 80- to 90-person DPW staff. This is when the DPW was located on Buffalo Street, in a building that’s now a charter school.

That’s a lot of bouncing around!
Well, then came the layoffs, and I was off from between 1979 and ’82. In the interim, I worked for HELM in Highland Park. When I was called back to Hamtramck, it was for the library again, and in the exact same capacity as before. I then moved to the Treasurer’s Office as a cashier; the Assessor’s Office; and on to Payroll, which was a promotion. By this time, there was a more advanced computer system than when I did payroll back at the DPW.

Where are we at timeline-wise by now?
This was now around 1988-89. In 1990, I became the Junior Accountant for the Community & Economic Development Department, which later became titled Administrative Assistant.

So, having been with the City for so long a time, you’ve seen a few changes of the past administrations in Hamtramck?
When I first came in, it was near the end of (Mayor) Raymond Wojtowicz’s term. Then there was (Mayor) Albert J. Zak’s second term — he died in office. Kozerski, Kozaren; things moved pretty smoothly during these years; Mr. Kozaren was in office for 18 years altogether. Then on down through (Mayor) Gary Zych, (Mayor) Tom Jankowski and on to (Mayor) Karen Majewski.

From 2000 to 2007, the City was in receivership. Louis Schimmel was sent down by Lansing to help sort out the budget. What do you recall about this recent time?
Before Mr. Schimmel came in, I worked primarily with a single boss — first Jerry Dettloff for eight years, and then Bill Cheff. Mr. Schimmel then put a different director in place.

Any interesting tidbits or odd general recollections?
In the 70s, I worked on one of those old-time switchboards over in City Hall — just like the Lily Tomlin character from Laugh In! Later on, at the Library, the Director Bea Adamski had all the student help call me “Mrs. Debbie.” I was only in my 20s myself, but it made me feel old at the time! (laughs). Also, in the later years, I got to feeling like the city’s historian — with so many new faces around, people sometimes looked to me for that, as someone who had been around for that long.

What are you doing with yourself these days?
I haven’t really made any grand future plans. To tell you the truth, I wish I’d have had a bit longer to stay — I had enough time in to retire several years before this, actually, with 27 vetted years in — but they added a couple more years to the severance package and it was just time. I could’ve used a small U-Haul truck to have cleaned out my office, so much stuff had accumulated, knick knacks and plants and so forth. Now I’m just plotting out some house projects.

So would you do it all over again?
Oh, my, yes. I enjoyed it, I really did. I do want to also say, in closing, that I especially miss all my coworkers, and the many acquaintances I’ve met down through the years.