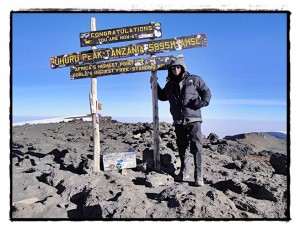 Who he is: John Rostek, a teacher at Hamtramck High School who is holding a unique fundraiser for the school district. Let’s drop in on John and find out what all the fuss is about.

Hello, John. Give me some particulars first, please, about you as a teacher. You teach at Hamtramck High – what subject(s)? How long have you been there? Had you taught elsewhere before that, either in this city or in another? Where did you get your degrees?

Rostek: First of all, I am proud to say that I am a product of the Hamtramck Public Schools. After graduating in 1986, I attended Central Michigan University, where I obtained two bachelor’s degrees before moving on to my master’s degree in Administration. I have been employed with Hamtramck Public Schools since 1995, and currently teach accounting and vocational business.

It seems that a certain something has come over you; that being, the urge to climb very high, very cold mountains. On every continent in the world. I’ve heard of this being done before. Did someone else having done this inspire you to follow in their footsteps, or just how did you get the idea to do this?

Rostek: I am who I am today because of the influence and inspiration of others. Every individual has a gift to offer. It is up to us to seek it and accept it. My favorite place to be is in the natural world. It started with the National Parks and grew from there. Hamtramck’s own Kevin Kondrat, director of the Hamtramck Housing Commission, escalated my adventures by taking me to Isle Royale, and also to Boundary Waters in northern Minnesota. From there, it just kept elevating!

I see the picture of you posing at the summit of Mt. Kilamanjaro. Was that the first of the seven that you’ve achieved? On that note, it does indeed look like Kilamanjaro’s summit, once notoriously snow-covered, is now bare rock. This swift change is often held up as a poster moment for those subscribing to the theory of global warming. Which is to say, virtually every climate scientist anywhere in the world. Care to comment on this?

Rostek: Kilimanjaro was the first summit of the seven that I climbed in August of 2010. It is true that the glacier is diminishing, but I believe that is part of the ever-changing natural world. The world has been evolving and changing since the beginning of time. Have humans contributed? That’s for the scientists to answer. I’m a business teacher.

Any other interesting tales from that adventure? Who did you go up with? I presume you had a least one seasoned guide – if so, were they local? Any near-death experiences? Was this your first time in Africa? If yes, how did you find the country to be, hospitality wise?

Rostek: It was my first visit to Africa. My experiences were positive. The natives were friendly, and always offered a smile. It was amazing to me that people with very little can find a way to be happy. That’s the great part of traveling — you learn valuable life lessons. I learned to appreciate the life I have and the country I live in. I have met some interesting people from all over the world, and continue to communicate with then regularly. In fact, two of the climbers on the upcoming Mt. McKinley climb are from the 2010 Kilimanjaro climb.

Backing up some, how long have you been mountain climbing? I confess to knowing little about it myself, as I have a problem with vertigo at elevations over about 7 feet. Is it really “because it’s there”? What is it with you people, anyway – what makes a person leave the perfectly good solid ground to go and do this crazy thing?

Rostek: I’m at the infancy level of mountain climbing. I have a lot to learn yet. I’m just surrounded by skilled climbers who are willing to teach me the ropes. Mountain climbing is symbolic of life. It is a long arduous journey, but when you reach your goal, the summit, it is the greatest feeling. Just like anything in life, you have to work hard to achieve greatness. The eighth summit!

You’re planning to tackle Mr. McKinley in Alaska in June of this year. More on that in a moment. Do you have a set schedule for going after the other remaining ones? I assume there’s a necessary period of downtime after something so strenuous? How do you decide which to go after when? I imagine it may have to do with the seasons, and likely weather patterns, and so on?

Rostek: I plan on climbing Mt. Elbrus in 2012. Mt. Elbrus is located in the Caucasus mountain range in Russia. I base my decision to climb on the climbing season. Some mountains can only be climbed during certain parts of the year. For instance, the climb on Mt. Everest begins in March. That would require missing three months of work.

This particular trip in June, to McKinley, you have tied into a fundraising campaign for money to help support the schools. You set the goal at $1 per foot, which would be equal to $20,320 if you make it to the top. How are the pledges coming so far? In a worst-case scenario,what happens if, for whatever reason, you don’t make it to the top – do you have a plan for refunding pledges?

Rostek: I am pleased to say that Dickinson East is the first “summit flag” sponsor. I am expecting each school building to be represented on the flag along with the AFSCME, HFT, and HAA unions. I have received commitments from FRD Pharmacy, Maine Street, Royal Kabob and your own newspaper, the Review. I am hoping that other local businesses will join the climb.

The yearly success rate of summiting Mt. McKinley is 54 percent. The reason why the success rate is such a coin toss is because of the severe weather conditions. The average temperature is -20 degrees and the occasional blizzards may keep you isolated in your tent for days. I don’t think the contributions are contingent on whether or not I summit, but on the cause itself. Remember, 100 percent of the donations go back to the kids.

Lastly – you like to say that you believe there are actually “eight” summits – the eighth being that which is in each of us, in your students. Care to expound?

Rostek: The eighth summit is our own personal climb in life. It is the climb “to infinity and beyond.” There are no limits to what we can achieve. Personal growth and achievement should be a continual process in our life, which is why all donations will “help our children reach the summit.”

Anything else you’d like to add that I didn’t address? And, thanks for your time.

Rostek: Just like mountain climbing, you need a tremendous team of people to reach the summit. I have an awesome group of talented students who are making this happen. They are the reason! I thank Dr. Russ Chavey for inspiring this climb, Lisa Vreede and Cat Ruffner for their guidance, Toni Coral for her partnership, and lastly, Ms. Westrate, Mr. Cartwright, Mr. Niczay and the School Board for their support.