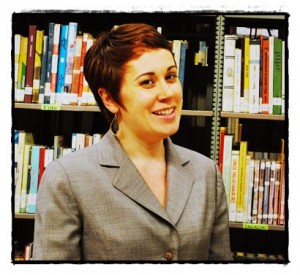 Who she is … Rebecca Westrate is the new principal at Hamtramck High School. Recently, The Review caught up with her to talk about her background and goals for the coming year. Her well-thought-out responses seemed to us to indicate a person at once at ease with, as well as firmly in charge of, her new domain.

So, you’re the new High School Principal! Welcome! Why don’t we start by getting a
bit of pertinent background on you: Are you local to the greater Detroit area? What sort
of educational background do you have, and where did you get your degrees? And what
manner of prior experience did you have before this job?

Thank you for the welcome. I have found that the members of the Hamtramck Public
School family have been open and welcoming, and that has made for a wonderful
transition. I grew up on the west side of the state, near Grand Rapids, and began my
career in education after completing my teaching degree at Grand Valley State University,
including a short time teaching in South Africa as part of an exchange program.
I moved to southeastern Michigan as a teacher working at both charter and public schools. I have worked as a teacher, administrator, and 9-12 Title 1 coordinator since that time; having completed my degree in Educational Administration at the University of Detroit Mercy.

What background were you given about the position, and about the district in general?
Do you see taking the school in any sort of a different direction, or don’t you have the
latitude to make those large decisions?

Having been in the area for a while, I was familiar with the school district, and the
opportunities that are unique to Hamtramck. In the short time I have had to interact with
the staff, students and the community, I have heard resoundingly that Hamtramck High
School has a commitment to continuing a tradition of academically rigorous course
offerings, a desire to meet the needs of all students, and the willingness to implement new
programming relevant to today’s learner.
As a part of the leadership team, I will work with the staff and community to continue to develop programs that have proven successful at Hamtramck High School, and also facilitate discussions around areas that need more attention.

As you’ve probably been made aware, there have been some real hard issues with
after-school violence, much of it sort of “tribal” or ethnic in nature. Have you spoken
with anyone about this problem, either within the district’s hierarchy, or else from
outside, for example the Police Department? How can we get parents out of the “my
child can do no wrong” mindset that’s developed over the last few decades? And do you
have any initial thoughts on how you might be able to help stem this (in fairness, it did
seem to die down quite a bit after there was some attention finally focused on it in the late
spring)?

I have had conversations with both the superintendent and the staff about the subject. A
detailed and updated district code of conduct will be a part of the discussions during the
opening of school, as well as the city’s new Parental Responsibility Ordinance.
At the building level, we will be proactive in addressing trouble through active listening and communication with staff and parents. The district has worked to install Restorative
Practices in all buildings, and we already have a volunteer working with young women to
develop this model of communication and understanding between students. Further, the
high school has adopted a Seminar period, focused in part on developing teacher and
student relationships, teaching models of communication, and ensuring that each student
has “the ear” of a caring adult each and every day.
These social interventions — along with additional changes to the management of the building, such as a lunch schedule more conducive to student traffic and a dress code formulated to cut down on distractions, provide a structure for kids to be both accountable, and supported, for personal success.

We know the state, under Gov. Granholm, has made it an issue to try to get the
kids’ testing scores elevated on the Michigan Merit Examination, but this seems to a
complicated issue. What are your thoughts on the policy as it stands – is it viable in a
district such as ours, or anywhere for that matter? The state says that it’s working –
scores are up for the second year in a row – but what does it all really mean? Are we
really graduating better educated high schoolers, or is it a mirage?

If you look to the mission statements of most districts, and certainly most schools, the
vision of a well educated student go beyond the traditional idea of academics. Building
goals often focus on students being productive citizens, problem solvers and/or leaders in
society in order to be considered well educated. This seems counterintuitive to the focus
that is placed on a building’s test scores, and does leave the question of what are we truly
“teaching” students.
This does not, however, change the fact that education reform is needed in this country.
And current reform finally asks the question, not, are we graduating better educated high
schoolers, but are we graduating high schoolers poised for success in today’s global
economy? The Michigan Merit Examination (MME) encompasses the ACT test which,
for many universities, has been the standard for college admission for many years.
College completion is almost mandatory in today’s job market, and the data generated
from the ACT helps schools redesign programs to ensure students are competitive.
Further, it feels more relevant to student testing, as they might have already chosen to
take the ACT, versus being forced to take state tests.
There’s no denying that it is important that students do well on these tests; however, it is
also important that we produce well-rounded students capable of succeeding in numerous
situations. Hamtramck High School showed success in raising its test scores this year and,
with focus, will continue to do the same in the upcoming years.

This is a pretty old building. How’s it holding up in general? And I guess that leads
into some other questions about the overall budget: Is the district holding its head above
water, financially? You’ve had competition in this town from the Catholic schools before;
now it’s coming more from charter schools. How does a public school compete to win
students to its “side”? In short, do urban public schools, in your estimation, stand a
chance in the long run, or are we destined to privatize education in this state; in this
country?

Although I could not comment on the district budget, I have had a chance to review the
high school building, budget and facilities, and Hamtramck High School remains a
competitive learning environment for students. The facilities are well-cared for, and
students have access to eight computer labs (including two brand new labs being installed
this summer), well-equipped science labs, and a media center with a full time media
specialist to assist the students with technology. Students and community members also
have access to the swimming pool and all the facilities at the Community Center.
To ensure the viability of public education, schools will have to be “competitive” –although what that truly means will vary from parent to parent. Traditionally, parents look for schools to prepare students for post secondary education, and to provide additional activities that interest their child, and give him/her a well rounded experience. They also look for indicators that are harder to describe, such as good home-school communication, or evidence the student feels valued and is gaining independence, and they want to know, if their student struggles, that they will be part of an intervention model that can provide a remedy.
Public education is under an immense amount of pressure nowadays, but can be successful by remaining focused on programming that supports and engages students and families, and by offering individualization of instruction, and a balance of flexibility, creativity and direct focus.

We’ve given you some fairly difficult questions, but none that will probably have
surprised you: the nature of the beast these days is, that everyone wants to lay everything
at the feet of the school system and say, “YOU deal with it.” Anything else you’d like to
add that I haven’t covered? And thanks so much for your time.

I really want to highlight the “points of pride” here at the high school:

Thank you for the opportunity to introduce all the good things going on at Hamtramck
High School.