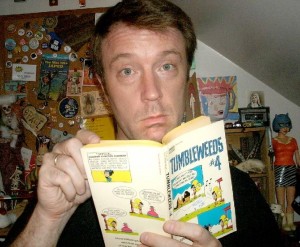 Sean Bieri is an illustrator whose work will be shown at Café 1923, and there will be an official opening this Friday to support the exhibit. The Hamtramck resident is also, among other things, the current Artistic Director of the Metro Times.

Let’s talk a little about your background – generally, but then also specifically as an artist/illustrator. Are you a native Detroiter? Where exactly did you grow up? When did you first develop an interest in drawing, and how did that come about?

SB: I grew up in Waterford. My dad worked as a technical artist for, at various times, GM, AMC, and Lionel trains. There were always lots of art instruction books and drawing supplies around the house, stuff left over from his school days. His mother worked for Xerox and would bring home cardboard rolls of paper, the leftover tail-ends of stuff they used for printing. My brother Mark and I would swipe my dad’s supplies and we’d constantly be making drawings on the paper rolls. Mark gravitated toward a more realistic style (he’s an oil painter now), but I always loved drawing cartoons, imitating newspaper strips (I was a big fan of “Tumbleweeds”) and Mad magazine. I moved to Detroit in ’88 to go to school at Wayne State (BFA in drawing).

You are, or were, a Hamtramck native, is that right? Has Hamtramck “shaped” your art in any discernable way? Did you ever have a show in Hamtramck?

SB: My wife and I bought a house and moved to Hamtramck from the southwest side of Detroit in 2001. The most important aspect of Hamtramck for me, art-wise, has been the succession of cafés that have sprouted up here — Shadowbox, Urban Break, now Café 1923. They’ve all been like second homes to us creative-types. Hanging out with other cartoonists at the Shadowbox in the early ’90s was my introduction to Hamtramck. But this will be my first solo show in town (or anywhere, really).

You’re heavily involved in HATCH, the Hamtramck Arts Collective founded in 2006. Also, the Dr. Sketchy portion of HATCH, wherein folks pay $5 or so to sketch some of Detroit’s most va-va-voom models, seems to have your charcoal-y fingerprints all over it. Why don’t you tell us a bit about both groups in general, mainly your level of involvement and overall sense of the projects?

SB: I’m one of the co-founders of Hatch. Our membership boasts all sorts of artists, and we try to give them opportunities to make and disseminate their work, through group tables at art fairs, shows at the café, online and elsewhere. We’ve done educational workshops for the community, organized gallery crawls and other activities. Our main concern at the moment is fundraising in order to convert the old police station on Evaline into gallery and studio space. We’ve already made a lot of progress with cleaning the place out, but now we need some major skilled labor done. (Any millionaires out there reading this — call me, we’ll talk.)

Dr. Sketchy was the first big activity Hatch sponsored. It’s an internationally-syndicated operation out of New York City that puts on figure drawing sessions with sexy burlesque dancers, sideshow circus-type performers and other fun folks as models. We usually hold the sessions here at the Belmont Bar or at the Scarab Club in Detroit, and we have music and prize drawings and other fun stuff going on. It’s a place for artists of all skill levels, who may not get a chance to draw as much as they’d like to, to create in an upbeat, no-pressure environment. I started up the Detroit branch in ’06, one of the earliest branches in the U.S. I think, and it’s been a big hit here ever since.

You’ve also the current Art Director over at the Metro Times, and according to your Gallery intro on the HATCH website, have been involved “in some capacity” with them for about 15 years. Presuming you work at the Metro Times offices proper, you must “see some things,” for better or worse. Any funny tales, interesting sidebars, that sort of thing, from your time there? What exactly goes into the average day of an art director for Detroit’s hippest rag? I see you’re a married guy – does the Metro Times figure in your future plans, assuming you’ve mapped some out? Or are you brewing some other notions?

SB: I started working at MT in ’90, left in 2000 to work at an ad agency, then came back again as art director in 2004. The work week ranges from slow (mid-week) to crazy-busy (early in the week, when we’re rushing to get the pages assembled and shipped to the printer).

Naturally, a paper like MT has always attracted a colorful cast of characters, and I could tell some stories… but I won’t! But I keep thinking: Since I started helping out at the campus newspaper at Oakland Community College in the mid-80s, I’ve worked through the last days of mechanical newspaper production through the early days of desktop publishing to now, when it’s virtually all done electronically.

Plus, I’ve worked in alternative newsweeklies since their early-90s heyday, into the age of the internet and through to today, when the future of print media is in a state of flux and uncertainty. So in a small way, I’ve been a first-hand witness to one of the most important stories of the information age, and it’s not over yet. I’d like to stick around and see what happens next.

So you’ve gotten your own show, opening this Friday Aug. 27 at the Café 1923 on Holbrook. Congratulations! Will this be mostly your illustrative art, or other stylings, or a mix, or what? I presume you’ll leave the performance art to Satori Circus. I also imagine that you may be selling at least some of these items. Care to talk about prices, or any other aspect of your “art-as-commerce”?

SB: The show is all cartoon-style illustrations that I’ve done for Metro Times since 2004. They’re framed laserprints, for sale for $35 each (there are no “originals” really – the hand-drawn elements of the work are all in pieces in my attic somewhere and the finished art is stored on a hard drive). I may be making up postcards featuring some of the work too. Right now, I’m planning a closing reception on Friday, Sept. 17.

Anything else I haven’t covered that you’d like to mention? Anyone, or thing, you’d like to plug? I suppose we might extend that to music you’ve heard lately, art shows or artists, baseball, the weather … Have a go!

SB: Let’s see … The Specs Howard school has been hiring me lately to host all-ages sketching sessions at their campus in Southfield (there’s one scheduled for this Friday night at 6 p.m.). Also, the science fiction website Tor.com has gotten into the habit of hiring me once a year to draw zombie cartoons for them (zombies are the greatest monsters because they’re us minus all our good aspects, which makes them perfect subjects for both horror and humor). And there will be a mini-Dr. Sketchy session happening at the People’s Art Festival on Sunday, from 1-2 p.m. at the Motor City Blog booth (featuring the lovely Lushes LaMoan modeling).

You didn’t ask for advice, but here’s what I got for any aspiring graphic artists out there: Go rent To Inform and Delight, a documentary about seminal designer Milton Glaser. He’ll tell you everything you really need to know.