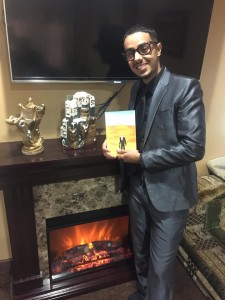 Omar Thabet is the author of a new book that is about to be published which chronicles the experiences of a young Muslim man in the post 9/11 world.

By Charles Sercombe
Meet Omar Thabet. He’s a 22-year-old Yemeni-American who recently graduated from Michigan State University where he studied journalism. He lives in Hamtramck and has just written a book, “Life, Behind the Scenes.”
Let’s hear what Thabet has to say about himself and his book.

Tell us a little bit about yourself.

Thabet: My name is Omar Thabet and I am a 22-year-old Yemeni-American born in Detroit, Michigan. When I was 5, my parents decided to move a mile down to the city of Hamtramck, and we’ve been living here ever since. I attended Hamtramck Public Schools all my life (Dickinson East Elementary, Kosciuszko Middle School, and Hamtramck High School) and played sports for those schools as well. So if you were trying to find me, it would probably be at your nearest sporting arena.

What prompted you to write a book? Who is publishing the book? When will it be available for purchase?

Thabet: There are many factors as to why I wrote this book. The biggest factor though is I wanted to start my journey as being a voice for the Muslim people. So when I thought to myself what it is I can do that would get me closer to that journey, writing a book came to my mind. I wanted to have an impact on people in a different way.
The book is being self-published through Amazon’s CreateSpace. So if you wanted to purchase the book, you would have to go to Amazon to do so. The book will be available on Fridady, December 19th.

Is this book fiction or non-fiction, or a combination of both?

Thabet: This book is a combination of both fiction and non-fiction. The plot of the book is fiction, but the events mentioned in the book are real. To sum up the book in a sentence, “Life, Behind the Scenes” is a non-fictional memoir with a fictional twist.

What does the title of the book refer to?

Some might say that being 22 years old is a little young to write about yourself. What makes your life story, so far, interesting?

Thabet: I don’t think my life story is what’s interesting. I believe it’s the life story of a Muslim man, living in America, post-September 11, 2001 era that’s interesting.
The fact that one day somewhat defined not only the way the world views Muslims, but also the way Muslims view the world, is already compelling to me. Anything the reader learns about my main character, Noah Ali, who is somewhat based off of me, just adds to the reading interest.

Briefly, what is it like to be a Muslim man in a post-9/11 world? Have you had some bad experiences?
Thabet: It’s different. Some Muslims would say they don’t feel comfortable being in their own skin anymore because of the harassment they receive from others.
I, myself, haven’t really personally experienced anything out of the ordinary in terms of me being a Muslim in America. I’ve been fortunate enough to live in a city where there are many different people who represent different backgrounds in this world.
That city being Hamtramck, of course. As well as, while I was at college in East Lansing, I was fortunate enough to live with American roommates who didn’t look at the religion you follow or the color of your skin as something they would judge you for.
It’s more of me recognizing what other Muslim people have gone through and experienced since September 11 that led me to writing this book. Let’s be honest, racism still exists and it comes in all different colors.

Do think this situation you describe will ever change?
Thabet: Of course. The sooner we understand one another and realize how similar we are as people of this universe, the sooner we’ll get over this racism hump.
It’s all about bridging the gap between Muslims and non-Muslims, which is something I hope this book would do.

What do you wish the reader will take away from your book?
Thabet: At the end of this book, I hope the readers understand that Muslim people are as ordinary as anyone else. Plain and simple. As I mentioned before, the media has somewhat portrayed Muslims as bad people. Well my hope is that by telling you feel-good stories about the life of Noah Ali, that at the end of it all you’ll understand that stereotyping all Muslims as “bad people” is just simply wrong.

You say this is your first book. Is that a hint that you plan to write more?
Thabet: Hopefully. If an opportunity presents itself then I’ll be sure to take advantage of it. Maybe when I’m older, though. Now, I need to launch my journalism career.

How has growing up in Hamtramck/Detroit shaped your life?
Thabet: It has shaped my life so much that I dedicated a whole chapter in the book for those two cities. But seriously though, I can’t stress it enough how grateful I am to be from Hamtramck/Detroit. Outsiders would be quick to recognize all the hardships our city may be going through because of a struggling economy.
But I believe all those hardships shaped me into who I am today. There is a reason why people from these cities are more humble than people from other places. And for that, I thank Hamtramck and Detroit!
(Editor’s note: You can out find out more about Thabet and his book by going online to: https://www.facebook.com/lifebehindthescenes?ref=hl. You can also watch a Youtube presentation of his book at:  https://www.youtube.com/watch?v=5Jf2ubXnAQc)