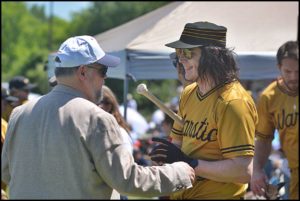 Detroit rock and roller Jack White talks with Gary Gillette, the President of the Friends of Historic Hamtramck Stadium.

By Charles Sercombe
Detroit rocker Jack White has proved to be a major league player in the restoration of the historic Hamtramck Baseball Stadium.
White and his “Warstic Woodmen” hosted a surprise, well, sort of, baseball game at the stadium Thursday afternoon.
The game was a charity fundraiser to continue the fundraising effort to restore the stadium, and also served as a way to promote an athletic gear company White is a partner in, Warstic Sports, Inc.
The main products of the company are baseball bats, which they call “Warstics.” White is a partner in the company along with former Tigers second baseman Ian Kinsler.
Although the game — and White’s appearance in it — were hush-hush for most of the week, it turned out to be Hamtramck’s worst kept secret.
Hundreds of spectators turned out. 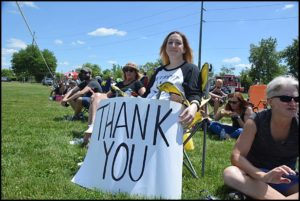 This isn’t the first time White has gone to bat for the stadium.
He kicked off a recent online fundraiser for the Friends of Historic Hamtramck Stadium by pledging $10,000. That generosity led to others pitching in a total of $50,000, and that turned into a double play when the Michigan Department of Economic Development Department provided a matching $50,000 grant.
The Friends group has been working with both city and public school officials to win a multi-million dollar grant from the Ralph C. Wilson, Jr. Foundation to totally renovate the stadium – which was once the homefield of the Detroit Stars in the 1930s. 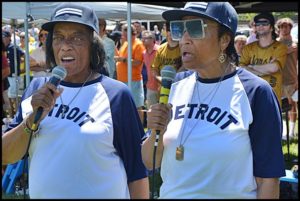 The Stars were part of the Negro Baseball League back when African-Americans were not permitted to play in all-white Major League Baseball.
Over the years, the stadium fell into disrepair. For many years, the stadium’s history was not known, until local folks did a little digging and discovered its historical significance.
It has since been officially designated as a Michigan Historical Site. A plaque stands in Veterans Park that recounts its past.
One of the Detroit Stars’ leading players was Norman “Turkey” Stearns. Stearns is deceased, but his daughters, Joyce Thompson and Rosilyn Brown, were on hand for Thursday’s game.
They sang the national anthem at the start of the game. 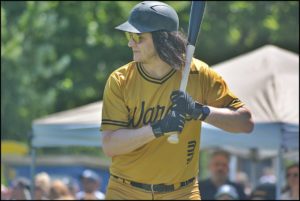 Stearnes’ granddaughter, Vanessa Ivy Rose, also took part in the action, playing in center field for the home team.
Warstic was founded in 2011, and White has said he might open a baseball bat factory in Detroit. White, who also owns Third Man Records, is now based in Nashville, and is on tour with The Raconteurs.
The Raconteurs, who have a number one record out, kick off their national tour tonight (Friday, July 12) and Saturday at Detroit’s Masonic Temple.
July 12, 2019