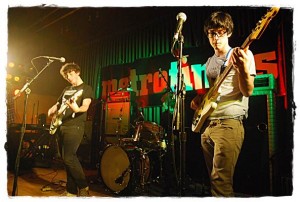 The Blowout has blown through once again.

Marred this year, after closing time on Friday evening, by a truly ugly incident (see separate story, below) involving three female attendees being kidnapped and assaulted at gunpoint, the Hamtramck music staple will have to see whether it can withstand the resultant bad PR for next year.

The event, in this, its 15th year, also featured strong winds on Friday night. Gusts reached approximately 40 to 50 miles per hour at times, and shredded some businesses’ signs and awnings along Jos. Campau and elsewhere. Drunk concertgoers occasionally assisted in the wind’s mischief.

The Blowout had a different “ground zero” than for years past, having relocated from the Gates of Columbus Hall to the Polish National Alliance Hall up and across Conant. Sprawling across 14 of Hamtown’s most storied and illustrious rock bars, the event engenders an unnaturally high amount of foot traffic along the city’s main drags.

From being there in person on Friday night, I can tell you that some bars were packed to the gills, while others had more comfortable floor-space ratios. Surprisingly jammed up was the upper floor of the Polish Village Café, a last minute stand-in for the Atlas Bar, which had not yet gotten its own upstairs back to code after the fire there several months back. Whiskey in the Jar was also featuring smush-your-neighbor time.

By contrast, the cool interior and open seats of Mars Bar were welcome relief. Likewise, the spacious PNA Hall afforded plenty of room to stake out one’s territory without somebody else’s elbows jammed in your back.

Still, the ugliness that would unfold early Saturday morning couldn’t help but color the final night. Both The Metro Times and the Hamtramck Police provided more bodies to watch the streets on Saturday night.

The result was a happily uneventful finale. Or perhaps, one where all the events stayed where they belonged – inside the clubs.

The Metro Times own Blowout sub-website took care not to dwell on Saturday morning’s awfulness. Instead, bloggers gave tired-but-happy commentary more typical of the Blowouts of happier years.

“…Woke up… covered in glitter. … Blowout was a blast,”wrote Mike Anton of the group the Mantons.

Some bloggers did mention the wet, heavy snow that fell on the last night, and the giddy treachery of both sidewalk and road, alike. One blogger recalled overhearing someone rhetorically query, “Where are we, in

Don Duprie, of the band Doop and the Outlaws, sounded amazed to have returned to his trailer to find that, even though he’d forgotten to shut the doors on it after they’d parked in front of New Dodge Lounge, and even though it also was 2 a.m. on the city’s southend, nothing had been “removed.” (Consider this the exception… — Ed.)

“Attendance was actually up this year,” according to Metro Times Publisher Chris Sexson. He cited personal favorites from this time around, including Pink Lightning at Skipper’s, The Dirtbombs at the Polish National Hall, and Johnny Headband at Small’s.

He also again expressed his sadness on behalf of the women caught up in the occurrences of Friday night.

A few celebs flitted amongst us. The Black Keys, in town for a major gig of their own, and just a few years removed from having played the Blowout themselves, were spotted at the PNA Hall on Saturday.

Legendary rock impresario Kim Fowley, whose “Psychedelic Dogs” did a short set on the PNA stage on Saturday, was spotted by yours truly the night before, leaving Mars Bar with a cane supporting his lean, lithe frame.

Sounds like a normal, garden-variety Blowout, right? Music, snow, drinking, the odd celeb here and there? And yet, it wasn’t.

Oh sure, Hamtramck has lost its sheen of being a safe oasis before, due to various incidents. But this one could conceivably have really tarnished one of the area’s truly fun, and long-established, events.

If I had to bet, I’d bet that it things will be pretty much back to normal again next year. Most peoples’ memories are mercifully short when it comes to events such as these. Witness the Detroit fireworks, which have had several high-profile problems over the years.

But let’s hope that what was learned was, that you can never have too many eyes watching each others’ backs – during the Blowout, or any other time for that matter.