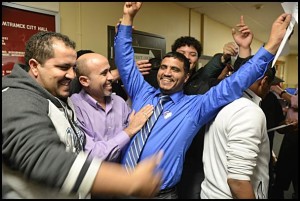 By Charles Sercombe
Hamtramck’s city council now has a new member.
Councilmember Robert Zwolak lost his bid for re-election to Saad Almasmari.
Almasmari, who came in first place, was part of a slate that included incumbents Anam Miah and Abu Musa. That was the only slate in this election.
Both Miah and Musa were re-elected.
The unofficial results for Tuesday’s General Election are:
Saad Almasmari: 1,176
Abu Musa: 1,141
Anam Miah: 1,002
Susan Dunn: 696
Robert Zwolak: 636
Cathie Gordon: 622
Upon hearing the election results in city hall, Almasmari was ecstatic.
“I expected this (sic) results,” he said. “I asked God to help me, and I promise to serve the community.”
This was Almasmari’s first attempt to win a seat on council. He previously ran unsuccessfully for a position on the Hamtramck Public School Board.
The voter turnout for the election was 2,230 voters. This general election was unusual in that there were no other political races or state, county, or local proposals on the ballot.
The weather on election day was picture-perfect: Sunny and in the mid-70s in temperature.
Hamtramck, for the first time in its history, now has a Muslim majority on council.
The new term for council starts on Jan. 1, 2016.
Hamtramck, once a predomintely Polish-Catholic community, is now  home to a growing Bangladeshi and Yemeni community.

Both communities are largely Muslim, and they now represent about 50 percent of the city’s population, according to recent U.S. Census figures. There are about a dozen mosques located in the city and in the surrounding neighborhoods in Detroit.
Despite the election results the role of the council is extremely limited, with the state still providing oversight on all decisions of the city. Hamtramck only recently came out of a financial crisis last December when a state-appointed emergency manager left her position after being here for 18 months.
A state-appointed Transition Advisory Board still has control of all financial decisions of the city. There is no end date to that oversight.

10 Responses to Hamtramck city council election kicks out one incumbent