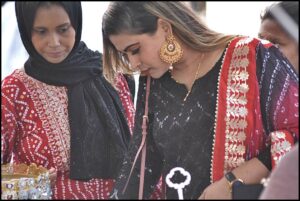 By Charles Sercombe
One of Hamtramck’s more colorful festivals is still going on today (Sunday, July 31).
The Hamtramck Diversity Festival, which started on Friday, is a celebration of the area’s Bangladeshi community, which numbers around 20,000 in an area that includes Hamtramck and the Detroit neighborhood just north of the city.
The festival, held on a portion of Conant south of Carpenter, is an explosion of colorful food and native Bengali clothing.
Besides getting a taste of Bangladesh, there are a number of performers and bands, some of whom traveled from Bangladesh. 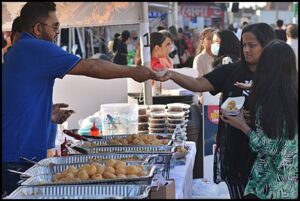 Sunday’s event kicked off with a who’s who of local politicians and candidates running for office in Tuesday’s primary election. Michigan Attorney General Dana Nessel and Congressmember Rashida Tlaib were among the many who spoke.
The city’s Bengali voting bloc is now one of the most powerful in Hamtramck.
Rebecca Islam, who introduced the speakers, noted that this means political “power” for the community.
State Rep. Abraham Aiyash, who is seeking re-election in a newly drawn district that includes Hamtramck, praised the Bengali community for reviving Conant and “bringing Hamtramck back from the dead.”
That was back in the 1990s when many Conant businesses were just vacant buildings. Bengali businesses soon blossomed in the once dormant avenue, and it now boasts an active street life during the day and night.
Several years ago, city officials acknowledged the contribution of the Bengali community and gave Conant the honorary street name of Bangladesh Ave. 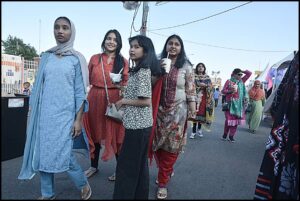 The festival officially shuts down at about 11 p.m., but once the festival gets going people don’t leave until midnight or even later.
Be sure to come hungry.
Posted July 31, 2022