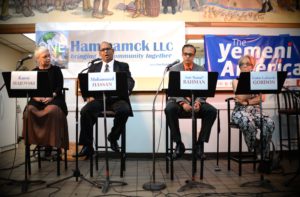 The “Hamtramck USA” documentary is ready for viewing, but because of the coronavirus pandemic a number of film festivals that had scheduled to show it had to cancel.

By Alan Madlane
Hamtramck, the world will soon know you more.
There’s a new documentary film about our town, “Hamtramck, USA,” and it was supposed to have been a featured part of the Free Press Film Festival this spring.
Alas, that has had to be pushed back to this December because of the coronavirus threat.
In the meantime, you’ll just have to content yourself with taking a walk around town until then, yes?
Two filmmakers from the Washington, D.C. area, Justin Feltman and Razi Jafri, spent about a year in town filming various cultural and civic events – including contentious city council meetings.
The year they were here, 2017, was also an election year for mayor and city council, but more on that later.
Feltman told The Review he hopes to get the documentary aired on public television.
The film was supposed to have screened even earlier than the Freep Fest, at the SXSW (South by Southwest) festival in early March, but that was right in the heart of the ramping-up pandemic, and that festival was completely scrubbed this year.
Still, some reviewers managed to see it and review it. So, how’d it fare?
Reviews on RogerEbert.com, Film Threat and The Spool each singled (doubled?) out co-directors Justin Feltman and Razi Jafri for their “hands-off” style.
The film apparently has little to no narration influencing it in any one direction.
Instead, the film lets its subjects set its tone.
Coinciding with the 2017 mayoral primary and subsequent election that ultimately pitted incumbent and still mayor Karen Majewski against challenger Mohammed Hassan, the film seems to skew heavily toward exploring the town’s political landscape.
The film’s website, hamtramckdocumentary.com, states that the film explores “life and democracy in America’s first Muslim majority city.”
“Through the exploration of the city’s rich history and this heated election, ‘Hamtramck, USA’ wrestles with identity politics, power dynamics, and the immigrant experience in America,” the film’s summary concludes.
The filmmakers simply “being truthful and present” offered cinematic insight into this “story of a very specific and unusual place,” noted Brian Tallerico, in his capsule review on RogerEbert.com.
And the film revealed “a borderline-idyllic community, wherein neighbors of vastly different backgrounds can smell each other’s meals and hear each other’s prayers,” wrote Film Threat scribe Alex Saveliev.
By far the most in-depth review appears in The Spool, penned by Editor-in-Chief Clint Worthington.
“How does the town pick the right leader to represent such a diverse citizenry?” muses Worthington. Still, he notes, the film’s approach is “remarkably gentle” in its presentation of the town’s 2017 mayoral and city council races.
In the end, the movie’s “dedication to highlighting the best of Hamtramck’s diverse populace is admirable and heartwarming,” Worthington concludes. “In these cynical times, it’s enough to make you believe there are places in America where democracy exists.”
We can’t wait to see this one.
Posted: May 22, 2020