Hamtramck Drugs is a step back in time when customers mattered 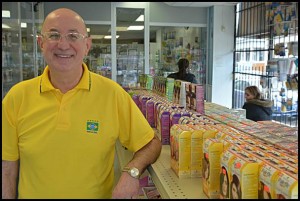 Chet Kasprzak has owned Hamtramck Drugs on Jos. Campau for 15 years. He believes in personal interaction with his customers.

By Alan Madeleine
Special to The Review
Chet Kasprzak is one of the nicest guys you’ll ever meet.
That alone could make one want to patronize Hamtramck Drugs. But there are plenty of other reasons.
For example: How many pharmacists do you know who may be willing to go as far as the Peruvian Rain Forest for your medicine?
Spend just a few minutes with Mr. Kasprzak, and you’d see what might inspire the kind of customer loyalty Hamtramck Drugs has.
Known by Motor City Pharmacy and then Knight Drugs before its current moniker took hold some 15 years ago, it’s a step back into a more personalized, customer-friendly time.
Kasprzak, now 65, got his professional start in Detroit.
“I was in a hospital pharmacy first, over at Harper Hospital,” he says. “Did a little retail work early on, too.”
He had gotten his pharmacy degree from nearby Wayne State.  In those days, he says, one only needed a bachelor’s degree to become a pharmacist.
He worked part-time for Motor City and Knight before stepping into the business and renaming it Hamtramck Drugs. Being able to speak Polish fluently helped him to gain the trust of the Hamtramck community that was, in those days, quite heavily Polish.
“Now, we get a wider variety of customers,” Kasprzak says. “Bosnian. Bangladeshi. Yemeni. Just a cross-section of the city’s different groups.”
The store stays relevant by offering products and services few others will.
“We carry lots of herbals,” Kasprzak goes on. “We make that effort to find, for example, the older products that some customers might remember, that they still want or feel they need.
“We get to know the customers by name, get to know their family members sometimes. They know that, if they’re having a rough week financially, and it’s been tough out there lately, well, they can come in and we’ll make sure they get their medicine when they need it.”
The store gets products not only from Poland, but also, for example, from Germany.
“Cosmetics, mostly, from Germany,” Kasprzak specifies. He also gets some vitamins from Poland.
And then, there was that one cancer patient, the one who sought a rare medicine from Peru.
“Getting it through Customs was a battle. We had a connection to a missionary priest down in Peru, who we trusted. So we were able to get this person their medicine.” He smiles at recalling the incident.
The Affordable Care Act is, in some cases, Kasprzak says, restricting which pharmacies patients can use.  Hamtramck Drugs is one that caters to these people.
“If CVS can’t or won’t take them, we still can. We’ve been granted that designation. I made sure the folks at CVS knew they could send them to me,” he adds.
Other ways they help those with special needs are equally impressive. If the family has someone who only speaks Polish, the store will send someone with them to the hospital to act as both transporter and translator.
If an elderly person is shut in, they will deliver the medications to that person. If someone with multiple insurances is unsure which to use for their prescriptions or the like, Kasprzak says the store will help figure it out to their best advantage, even if the time required to do so means they have to spend “a lot of hours.”
So, how long does he plan to stick with it?  He says he is in no hurry to retire.
To demonstrate his continued interest in the field, he showed how he’s taken up decorating the store with old product containers and even old drugstore “globes” — colorful glass objects similar to barbershop poles. This hobby, one infers, may just keep him going forever.
His customers — both long-time and new — will no doubt be glad.
Hamtramck Drugs is located at 10300 Jos. Campau, on the northeast corner at Trowbridge. Their long-familiar blue awning was redone in red about a year ago. They’re open Monday-Friday from 9 a.m. to 5:30 p.m., Saturday from 9 a.m. to 2 p.m., and they are closed Sundays and holidays.