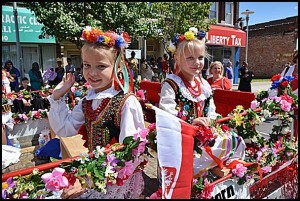 Once again, the Polish Day Parade, held on Monday, capped a perfect weekend for the Hamtramck Labor Day Festival.

By all accounts, it looks like the annual Hamtramck Labor Day Festival was another successful weekend.

Co-organizer Konrad Maziarz said bills are still coming in as well as receipts so he could not pinpoint whether there was a profit this year, but he said he felt that at worse the festival broke even.

But success isn’t just measured in money, he added.

“All in all, the festival was a success for the community,” Maziarz said. “It brought a lot of people into town.”

If there were any complaints heard over the weekend it was that there was only one polka band included in the music line-up.

But Maziarz, who did not organize the music schedule, said it’s part of a changing demographic that the festival is reaching out to.

If it is a younger, hipper crowd that is being sought, then lining up top garage and cutting edge performers was the way to go. It sure made Royal Oak’s music offering seem “square,” as Mayor Karen Majewski pointed out on her Facebook page.

Certainly no one could complain about the weather as Mother Nature provided sunny skies and mild temps throughout the weekend.

Of course the Polish Day Parade on Monday afternoon attracted thousands of visitors and dignitaries.

Although he is not seeking re-election and is about to retire, Sen. Carl Levin returned as he has for many years to march in the parade with his brother, Congressman Sander Levin.

And perhaps not coincidentally, Levin’s would-be successor, Congressman Gary Peters marched in the parade as well, backed by a large number of supporters who chanted “Gary, Gary, Gary.”

Despite the growing number of scandals involving his administration, Wayne County Executive Robert Ficano also participated in the parade. But at one point in the parade there were some onlookers ominously holding tomatoes, as if ready to throw them at Ficano’s escort car.

The tossing of fruit and vegetables isn’t without precedent. When President George Bush (the first) visited Hamtramck and marched down a part of Jos. Campau a bystander threw broccoli at him.

It was unclear what the point of that was, but Bush had famously said he didn’t like broccoli, which apparently drew the ire of broccoli lovers.

Crime-wise – something that has been a major concern this summer — Police Chief Max Garbarino said there were no significant incidents, other than the occasional disorderly conducts.

As for next year, it will once again depend on the city giving festival organizers the OK to proceed. Maziarz said plans call for expanding the volunteer base and going after corporate sponsorship now that the festival has been firmly established as a 501(c) non-profit organization.

Chalk up another festival year and another great party to usher summer out.

4 Responses to Hamtramck Festival provides a rocking end to summer