Hamtramck gets starry-eyed for a day 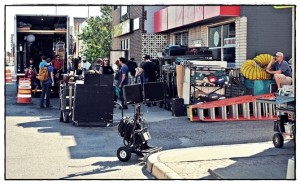 Vampires were in Hamtramck on Tuesday.

Not the blood-sucking kind, but the Hollywood type – as in a major movie production.

And appropriately – and totally coincidentally – the production took place inside Record Graveyard on Caniff. How perfect can you get – a vampire movie scene inside a store called Record Graveyard?

Well the irony probably wasn’t lost on the production company but the name of the store had nothing to do with shooting the scene there. Inside was made to look like the legendary New York City record store, Bleecker Bob’s. Apparently the movie folks didn’t have to do much of a makeover since they were pleasantly surprised to find out that Record Graveyard already kind of looks like the inside of Bleeker Bob’s.

Must be something about vinyl geeks who happen to like thousands of records piled up everywhere and old albums being displayed on the walls. Other scenes of the movie are being filmed in metro Detroit.
The film is entitled “Vamps” and is being directed by Amy Heckerling, who is most well known for her film, “Clueless.” The film has some A-List stars, such as Alicia Silverstone, who starred in “Clueless,” and Sigourney Weaver.

And it also features some not-so A-Listers, such as Marilu Henner (of “Taxi” fame) and comedian/actor Richard (“Don’t call me Rich”) Lewis.

The movie is being described as a “comedy-horror” in which two vampires fall in love and must “face a choice that could jeopardize their immortality,” according to Wikipedia.

We’re not entirely sure what scene was being filmed in Hamtramck but if you hung around the set and the city parking lot on Caniff and McDougall where base camp was set up, you could see the actors walking about.

All but Sigourney Weaver were in Hamtramck.

Richard Lewis in particular was talking to folks hanging around the set and he accidentally walked into The Review office before being redirected to the set.

Silverstone posed with the brother of The Review’s publisher. Vata Ulaj got a rare opportunity to take a picture with Silverstone largely because he knew the site director/security guy.

News of the production was kept pretty hush-hush here in town, which is amazing considering how gossipy Hamtramck is. Community & Economic Development Director Jason Friedmann said the production company approached him about a month ago.

He said Hamtramck has been getting good word of mouth in the television and movie industry from previous companies coming here to shoot scenes, most notably the Drew Barrymore flick, “Whip It” and the recent – and yet-to-be-aired – “Detroit 187.”

Friedmann said the production also brought in some extra revenue, including permit fees and income tax. He said although it’s not a huge sum of money, at least the production “gets our name out there.”

Another spin-off for the city is that a well-known Hollywood catering company will soon be setting up business on Jos. Campau to serve the growing film industry.

Unfortunately for the city – and Michigan, perhaps – there is a threat from Republican elected officials to repeal the state’s generous tax breaks being offered to lure the film business here. If the tax is eliminated or greatly reduced, it is believed the movie industry will look outside the state to shoot movies.