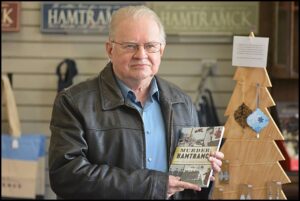 Author Greg Kowalski has written yet another book about Hamtramck. His new book is called, “Murder in Hamtramck: Historic Crimes of Passion & Coldblooded Killings.”

By Alan Madlane
Greg Kowalski, Executive Director of the Hamtramck Historical Museum and a prolific author sometimes fondly referred to as “The Hemingway of Hamtramck,” has yet another city-themed book out, and this one’s a dilly.
“Murder in Hamtramck: Historic Crimes of Passion & Coldblooded Killings” was released in mid-February. It covers some of the more sensational such crimes from between 1884 and 1978 (Kowalski cuts the book off there, out of deference to any potential relatives, friends or survivors of any more-recent violence), and is well-organized, illustrated with photos, and just plain fascinating.
This is his 10th book about Hamtramck.
We cornered Greg (well, by email, well distanced for these COVID times) and solicited his answers to a few burning questions about his latest sure-to-be success.

The Review: Many readers know of the Hamtramck Historical Museum, even if they have never managed to set foot in it before. They may well also know of you, since we sometimes feature articles in our paper that you have written.
Can you give us a very quick sketch bio for our readers’ sake, perhaps where you were born and grew up (specifically, if it was here in town), went to school, worked, etc., and what led you to your current post as the city’s undisputed historian of note?

Kowalski: I was born in St. Francis Hospital in Hamtramck on Nov. 2, 1950.
I went to St. Florian schools for 12 years, and then on to Highland Park Community College and then to Wayne State University, where I got a degree in journalism.
In 1973, I served as an intern at The Citizen newspaper in Hamtramck, and the following year I was hired as sports editor. In 1977, I was named editor of The Citizen, and served in that position until 1981. It was one of the most pivotal times in Hamtramck’s history, as Dodge Main closed and the GM Poletown plant became a reality.
Working for The Citizen was a priceless experience, and made me into a real journalist. But I also worked in corporate communications, including being a writer and editor for Blue Cross/Blue Shield after I left The Citizen. I also was manager of publications for Michigan Health Care Corporation, and I did a ton of freelance work.
In 1989, I went back into newspapers, hiring in as a part-time copy editor for the Observer & Eccentric community newspapers. I quickly became a full-time reporter, then was editor of the Southfield, West Bloomfield and Birmingham Eccentric newspapers.
In 2013, I was hired as Director of Community Relations for Bloomfield Township, and I stayed in that position until I retired last November. I had no great interest in local history until 1997, when Mayor Bob Kozaren asked me to work on a book to mark Hamtramck’s 75th anniversary as a city. The book (which I did with Charlene Sloan and Joe Sobota) was a huge success. It sold out almost instantly, and made a profit of $18,000.
The following year, I was asked to join the then-new Hamtramck Historical Commission. I became chairman at the first meeting because no one else wanted the job. But I was instantly drawn toward Hamtramck’s history.
The Historical Commission led to us to form the Friends of Historical Hamtramck, a 501 (c) (3) organization in 2004. And ultimately that led to the establishment of the Hamtramck Historical Museum, where I am now executive director.
Hamtramck’s history is incredible. After all these years, I am still amazed at what we continue to find out about this amazing city.

The Review: Your latest book, “Murder in Hamtramck,” features meaty tips of town lore in the murder trade. A blurb in the back of the book states that this is your twelfth book, tenth on Hamtramck: why local murders as a subject, and why now?

Kowalski: There’s nothing special in the timing, but I’ve been doing a book about every two years since 2000. Murder is a seemingly natural topic. It is loaded with emotion, and endlessly interesting to people.
It’s just human nature to be attracted to crime stories. There is a lot of drama in each story. Murders can occur anywhere, and Hamtramck has had its share. Their stories are worth noting.
In my years as a journalist, I’ve covered a number of murders, from rushing to a crime scene to being in court when the killer was sentenced. It can be a wrenching experience even as an observer. I wanted to express some of that in the book.

The Review: Your book covers such crimes from as far back as 1884-5, all the way up to 1977-78. That’s a long period of time. How did you go about compiling or researching cases from such a massive amount of time?
Was there a certain criteria or threshold that had to be met, in order to make the cut this time around? Any from that time period that you had to leave out for any reason?

Kowalski: Researching was not too difficult, because there are so many sources of material. The Library of Congress has many newspapers on-line that relate the story of murders in Hamtramck, going back to the 1880s.
Then there were the local newspapers — The Citizen, the New Deal, the Plain Dealer and more. Also, I was able to draw on my own experiences with The Citizen. I still remember vividly the murders I covered, and the impact that seeing a murder victim had on me as a reporter.
There also are some police records of some from the earlier days, although many of those have been lost. In any case, when I chose a case for inclusion, I looked for some unusual angle.
The case of Roman Usiondek, who led an amazing life of crime, is an example. I ended the coverage at 1980 because I did not want to upset any survivors of murders committed less than 40 years ago. I did not want to aggravate painful memories, which really never fade.
Some murders were left out because they were not unusual, relatively speaking, like (for instance) a robbery gone wrong. Further, I didn’t just want to just do a recounting of crime stories. I wanted to put them in context: how social pressures influenced people, and in some cases contributed to what they did.

The Review: Out of all the murders in your book, do any in particular stand out to you for any reason?

Kowalski: The one that really hit me the hardest was a fairly short story of the woman who hung her three children, and then herself, in their flat on St. Aubin Street.
Her surviving son at first couldn’t convince an upstairs neighbor of what the mom had done. The sheer horror of this was mind-boggling. Of course, she had gone insane.
The story of Bernice Onisko is still intriguing. This was the most notorious murder in Hamtramck’s history. She was 17 years old when she was raped and strangled in an alley in Hamtramck in 1937. Despite a massive investigation, her case was never solved — and technically remains active today. I had at one time seen the original police photos of the crime scene.
But even if I had access to them now, I would not have included them in the book. They were heart-breaking.

The Review: Have you had any response yet to the book? Publicity, reviews on or off Amazon? Has anyone written to you through the publisher, offering tips on solving an unsolved case, or their psychic services, or etc.? Any comments from the local police force?

Kowalski: Haven’t got any comments yet, but the book just came out. The pandemic has limited book signings and presentations.
And no, I haven’t been able to solve any old cases that are still pending.

The Review: You mentioned that you end the book in the late ‘70s, out of deference to the victims or their families from any of the more recent incidents of the past 40 years plus. So, what will your next book project be, assuming you’ve decided (or maybe it’s already in process, hmm)? Will this one concern Hamtramck too?

Kowalski: There are still plenty of topics relating to Hamtramck that can be addressed. But it all depends on the publisher.
I’d love to do something a little more in-depth. I do have an idea, to do a work on what it was like to live in Hamtramck at certain specific times. This would be highly detailed, to the point it would note what the air smelled like and what sounds the people heard in their neighborhoods.
I’m not really interested in doing a non-Hamtramck book anymore. There’s still so much here to “mine,” and I want to leave a thorough chronicle of this city before I die.
Incidentally, I have stated in my will that, when I do die, I want to be cremated, and have my ashes spread on the railroad tracks in Hamtramck. They are the real roads to Hamtramck’s past.

The Review: Does the museum have a specific area dedicated to such seedier matters as those your new book recounts? If not, any plans for a special exhibit along those lines, to correspond to the book? Any plans for any public readings, signings, etc, eventually?

Kowalski: There are many references to Hamtramck’s wild days in the museum, including a genuine Prohibition-era still. We also have Paddy McGraw’s violin, and if you don’t know who he is, you have to come and learn his story at the museum.
We will be doing some programs and exhibits on the book later in the year, when the pandemic lifts. We also will do a podcast about it in the near future.

The Review: Feel free to add anything else.

Kowalski: The only thing I would like to add is, to please come visit the Hamtramck Historical Museum. We are doing some amazing things there, despite the pandemic. Come and see. You won’t be disappointed.
The Review: Well, thanks for taking the time to (further) entertain our readership.

Greg Kowalski’s book is available here in town at the Hamtramck Historical Museum (9525 Jos. Campau Ave.), at online sellers such as Amazon, and wherever finer text is peddled.