‘Hamtramck Hustle’ is no longer just about guys with cool cars 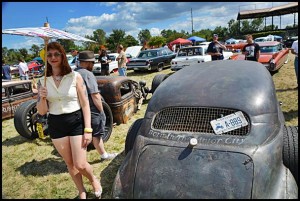 “I didn’t know so many chicks were into this kind of thing!”

Sure, there were the usual suspects that the Hustle brings out — the Dead Last Car Club members, custom car aficionados, proud project car owners, and all their buddies who are also into hot rods.

However, this year, the “chicks” may have outnumbered the dudes. Just entering the grounds of Veteran’s Park there was a noticeable and distinctive female flair to the show.

The era specific pin-up models were there, posing next to cars. And of course also on hand were girlfriends of the dudes attending.

But there was also Julie Fournier, of Fabulous Curves, who does pinstriping and custom detailing on cars, planes, trains and automobiles (anyone who has seen those massive turn-of-the-century trains at the Henry Ford has seen Julie’s impressive hand lettering work).

Doni Langdon, the publisher of Throttle Gals was there to distribute her quarterly magazine about hot rods: written for women, by women, about women.

Doni says that there are a growing number of ladies “willing to wrench, who are into the machine. Women enjoy working on something that has no feelings.”

Doni is also a scout leader and volunteer at the Belle Isle Aquarium and goes on to explain the freedom she feels while tinkering with motors.

“After a day of trying to appease the feelings of other scout parents, keeping the scout kids active and engaged, promoting new scout programs, and dealing with the sometimes monumental job of keeping the Belle Isle aquarium afloat, it’s nice to get my hands on something mechanical, logical.  I can walk away from the engine that I’m working on, and it won’t judge,” she said.

Raise your hands, moms, if you’ve ever felt those stresses. A room of one’s own?  How about a garage of one’s own?

Even the pin-up contest was presented by the ladies:  Amy Byrd hosted the tasteful beauty contest, and also prepped the contest hopefuls with 1950s style hair, makeup, clothing and accessories.

This was easily accomplished in the grassy field of Veterans Park, because Amy brought along her Vanity Vixen, a hot pink retro glam camper, essentially a traveling rockabilly beauty salon and party palace.  Is bombshell-for-a-day in your future?  The Vanity Vixen will travel to you.

The pin-up contest followed the car show, and was held at Kelly’s Bar.  The lovely Jeannine LaPorte won the title of Miss Hamtramck Hustle 2013.

So guys, hope you don’t mind sharing your tool box with these ladies. There’s a good bet that they’ll put the tools back where they belong when they’re done — maybe even organize them in a fashion making them easier to find?

More information about the Dead Last Car Club, Throttle Gals and Vanity Vixen can be found on their respective Facebook pages and at juliefournier.com.