Hamtramck Hustle is ready to rattle and roll 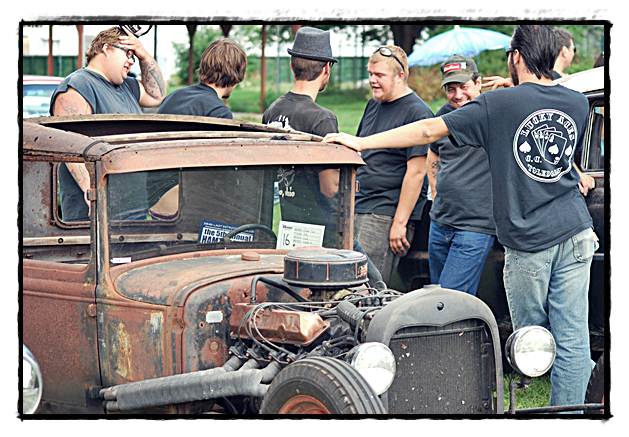 Some of the coolest classic cars and “rat” rods will be on display this Saturday at the Hamtramck Hustle, held in Veterans Park.

Maybe the Dream Cruise hasn’t totally sated you for looking at classic cars.

“It started out small, just two guys, ’Nate’ and ‘Dan’,” said member “George” (the members seem to prefer to stay last-name anonymous). “Now, we’re up to 11 in the club.”

The idea, George said, was to keep it local; in the city. Both the founding members lived here, and they perceived a lack of inner-city car shows, so they moved to fill that void.

Nowadays, they try to incorporate local businesses or locally-made products into these shows, he noted. To that end, they drafted a letter and sent it around to some of the bars, seeing if they’d be willing to host a compatible band, feature a few drink or food specials, or the like.

Kelly’s Bar responded, and will host the after-party (see below for details).

And while the Dead Last Car Club is more or less a “closed club,” meaning really just a group of friends who all know each other and have their own vintage rides, they put out a call to other local groups they’re friendly with, to bring their own vehicles on down to Saturday’s event to fill it out.

The club gives out awards as well, George said, among the top ones of which are “Best in Show, Best Hot Rod (any vintage car that’s been significantly re-worked), Best Kustom (a more or less stock car with, generally, only subtle changes), Best Truck, and Best Bike.” He mentioned there will be other awards as well, such as an award for Best Club Participation (other than their own).

There’ll be a few food vendors, but no alcohol sold. Members usually bring their own coolers. Expect a DJ, as well as a blues band.

The event kicks off with a 10 a.m. registration hour at Veterans Memorial Park, on Jos. Campau on the south end of town. The event itself officially starts right after that, at 11 a.m.

If you’re showing a vehicle, it’s $20 to register, unless it’s what’s known as a “trailer queen,” that is, a car that’s for show only, and not normally driven around. Trailer queens cost $40 to sign up. Admission to the show for spectators is free. For more info, email deadlastcc@aol.com, or call (313) 673-7845.

2 Responses to Hamtramck Hustle is ready to rattle and roll