Hamtramck is one step away from welcoming new city manager 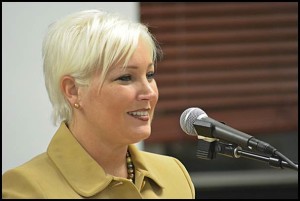 Katrina Powell is negotiating contract terms to become Hamtramck’s new city manager. She will be in charge of day-to-day affairs when the city’s emergency manager leaves in December.

By Charles Sercombe
The search for a new city manager is over.
But contract negotiations are continuing between Hamtramck’s emergency manager and the city manager candidate of her choice, Katrina Powell.
Emergency Manager Cathy Square declined to elaborate on contract terms, but promised that by the time she is scheduled to leave Hamtramck, on Dec. 18, “you will have a new city manager.”
Powell appeared to also be the top choice among city councilmembers who interviewed her and three other contenders for the job last month.
Powell comes from Florida, where she currently runs a fleet service that specializes in leasing vehicles for government undercover work.
She is the former city administrator for the City of Longwood, and former city manager for the City of Fort Meade. Both cities are in Florida.
Although it is not clear if there is a sticking point in the contract talks, Square was unable to come to terms with two previous candidates for the job. It all came down to money, Square said last spring when candidates met with the council.
One of the other candidates who impressed the council was ruled out because he did not meet the city charter requirements to take the job. That candidate, the current city manager of Marine City, needed experience in managing a city with a population of at least 10,000. Marine City has a population of just over 4,000.
Powell impressed the council with her knowledge of the city and her plan to market it. She also scored points by renting a loft on Jos. Campau and discovering the town before her interview with the council.
Hamtramck city officials have had a rocky experience with city managers prior to the state appointing Emergency Manager Square over a year ago. At one point, the city went through five city managers in just a couple of months.
The life of a city manager is not easy when it comes to pleasing local officials. Powell is no stranger to that.
She was fired from her Fort Meade job despite receiving passing marks for her job performance. She also had been praised for her managerial style.
At some point in her two years there, her relationship with city officials fell apart. The issues apparently came down to complaints by some that she didn’t return their phone calls and that she installed a security door leading to a wing of offices where she was worked.
Some took that to represent Powell shutting herself off from locals. There was also an accusation that she had referred to Fort Meade as a “podunk town.”
In her job at Longwood Powell resigned in the face of a backlash from officials. Powell defended her job performance, saying her resignation was the result of not being able to play politics.
While Hamtramck has a reputation of playing hardball politics, there will be a layer of security for Powell. Local officials will be prevented from firing and hiring people without the approval of a state review board that will be overseeing all financial decisions.
Square said she is looking at giving Powell a two-year contract.
Perhaps the biggest question for Powell is, why would anyone from sunny Florida want to move to Michigan, especially with winter coming?