Hamtramck knows how to celebrate the end of summer 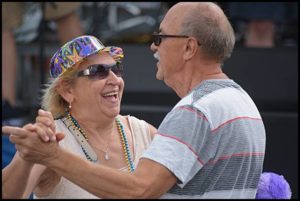 By Charles Sercombe
Well, that was a long weekend.
And a little wet, too, but all in all, the annual Hamtramck Labor Day Festival looked like another success.
This year was a little more special, since it was the 40th anniversary that Hamtramck has hosted the little party for several thousand of its best friends.
Once again, it was the music that put the city’s festival over the top. Some of the area’s best bands gave stellar performances.
This year also saw the return of wrestling, held on Sunday afternoon, which attracted a large (and weird) crowd. As you would expect, the wrestlers provided plenty of antics and spurred lots of audience participation (in the form of shouting insults). 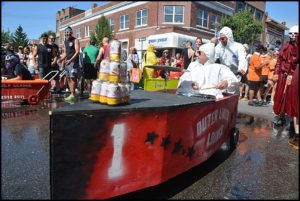 Festivalgoers got a taste of the city, foodwise, as well as enjoyed art booths, vintage clothing sales and even some politics with the World Worker Party, or something like that, offering their take on things.
The rain threatened to crash Sunday, but the skies cleared up in time. But on Monday, a couple of hours after the Polish Day Parade, a storm whipped in like something out of “The Wizard of Oz.”
Rain pelted down, leading one festivalgoer to remark: “That went from zero to 100 fast.”
And then, just as quickly as it started, the storm passed and all of those who scurried away came right back.
The highlight of weekend was the canoe race. 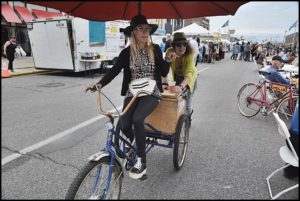 Let’s just say this outright (with a nod to the movie “Jaws”): It looks like we’re going to need a bigger street.
Why?
Well, with the expansion of allowing bars outside the city to also participate, this thing was jam-packed with onlookers, many armed with a truckload of water balloons.
If you came needing a shower, chances are you left pretty much having had one. The water balloons and soaker guns were non-stop (much to the annoyance of a certain photographer).
Perhaps summing up the good spirits of the weekend was Polish Day Parade Grand Marshal, and polka legend, Marshall (yes, that’s his first name) “Big Daddy” Lackowski, belting out his signature polka tune from the parade viewing stage: “Everybody Do the Ladeedah” — with Mayor Karen Majewski backing him up. 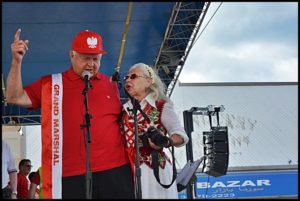 After that, it was time for some beer-barrel fun (cold Tyskie beer tastes so good on a hot afternoon!).
The only bummer was that the festival, at least symbolically, signaled the end of another summer.
Can’t wait for next year!
Sept. 6, 2019