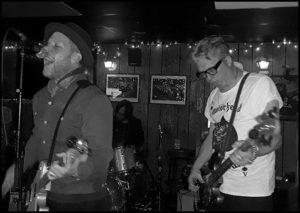 This year’s Hamtramck Music Fest was once again a smashing success. Above: The Dave Biermann Overdrive delivers at Polish Sea League.

By Charles Sercombe
Well, we here at Toast had the best intentions for this past weekend.
But that cold/flu bug going around caught up with our two reporters, who had planned to conquer the annual Hamtramck Music Fest.
Toast managed to quaff down enough meds to venture out Saturday night to see a friend’s band, the David Bierman Overdrive, play at Polish Sea League – that tiny up-north-kinda bar on Brombach and Edwin streets.
It doesn’t take too many folks to make this bar really crowded, and Saturday it was shoulder-to-shoulder.
The band was great, the people were friendly, and the drinks were flowing.
We caught up with proprietor Joe Karpinski, who once served on city council, and who’s father was once head of the DPW.
So, yeah, Joe’s been around here a long time, and he’s seen plenty of folks come and go.
He, like us, was amazed to see the city streets bustling with young music fans, walking from one venue to another.
For a moment, it seemed like Hamtramck was a cool neighborhood in New York City.
It had that big-city vibe.
Joe said if he could have this happen, say, once a month, he’d be happy.
Oh heck, Joe, aim higher.
It should be like this every weekend night.
Will Hamtramck ever get to that point?
That’s been a dream of a lot of folks, but dang if Hamtramck continues to take two steps forward and one step back. Just when you think the city will reach that tipping point, we have a setback, of sorts.
There are rumors out there that two bars in here town might be up for sale.
On top of that, the talk of the town this past week is that Polonia restaurant is up for sale. A number of folks are concerned that we are going to lose one of the only two Polish restaurants left here in town.
And as for those two bars, the last thing Hamtramck needs is another bar to close down, and we lose a place with a liquor license.
Too many of these former bars have turned into markets, which ticks us off. How many markets can this city sustain?
But let’s not jump to conclusions. We still think there is momentum here enough for things to still explode someday soon.
We worry, though, that by the time Hamtramck goes full-blown Midtown Detroit, Toast will be, well, toast – as in not here on earth anymore.
But let’s not get morbid about things.
This past weekend was a delight to experience, even just a tiny bit. The potential here is still mind-blowing.
We finished the night by stopping by a friend’s house party, where there was a lively jam session going on.
Now, that is what makes this city so fun to live and play in.
March 6, 2020