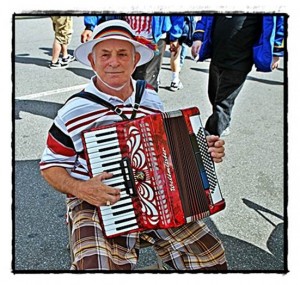 Hamtramck’s Labor Day Festival is a tradition that dates back quite some years, to 1980 in fact, but the one you should care about most is the one that’s right in front of you.

As in, starting tomorrow (Saturday, Sept. 3).

But let’s back up a moment. It was Wednesday, early evening, and the Labor Day Festival’s dynamic duo of Kathleen Bittner and Rachel Srodek (with four-week-old baby in tow) were bagging Jell-O shots in the rear of the Polish Sea League, counting them out into quantities of 100.

How big is a bag filled with 100 Jell-O shots? Big enough, mister.

I was there to get some extra info on the ins and outs of this year’s festival. Bittner, delightfully chatty as always, was only too happy to expound on some of this year’s model’s finer points.

Be aware that, just as with last year, there will be no festival activities today, Friday. Instead, things get going at noon on Saturday with the official Opening Ceremony. Music acts commence immediately afterward, at 12:30, on both the north and south stages. Food, art, and other vendors open for business, and the rides crank up.

Musical highlights include The Phantom Shakers on the north stage at 6:30, and a Miracles Tribute band (as in, “Smokey Robinson and…” although no, he’s not part of this act) on the south stage at 8:30.

Also, take part in the first night of the Pub Crawl, where you can ride to and from the various bars (but hopefully not vomit, or worse) on The Night Move, an eco-friendly express shuttle bus. At least 20 of Hamtramck’s finest bars are taking part this year, so check ‘em all out, because they’re a big part of what makes Hamtown special. First pick-up is at 9:30 p.m. at Caniff and Jos. Campau, and then approximately every half hour at the bars thereafter.

Sunday, look for the traditional Polish Mass at 11 a.m., and the first of two pierogi eating contests at 1:30, both on the south stage. Music highlights include The Haunted Hearts at 3 o’clock, Doop and the Inside Outlaws at 4:30, and The Polish Muslims at 7:30, also all on the south stage, and R&B stalwart Melvin Davis on the north stage at 8 p.m. Pub Crawl resumes with Part II, once again at 9:30, at the same starting point.

Assuming the effects of Part I have already worn off.

If you can only come one day, then why not make that one day Monday, as in Labor Day itself, when the biggest fun comes down the pipe? And why not wake up early, you health nut you, and go for a 5K run, or walk? Dubbed the “Golab-K,” (as in the Polish food fave, golabki – get it?) it starts registering at the semi-obscene hour of 7 a.m.

A yoga warm-up will then precede the actual 8 a.m. event itself, starting from outside the CVS on the northeast corner or Holbrook and Jos. Campau. You can park in the Hamtramck Town Center lot kitty corner (by Rite Aid and Glory Market). Please supply your own heart re-starting paddles.

If sedentary activities are more your thing, then why not watch the Hamtramck Yacht Club Canoe Races, hurtling down Jos. Campau promptly (-ish) at noon? Like some giant soap box derby run amok, life-sized push-carts are manned by teams of strapping youth, all with an eye on victory at almost any cost. Maybe they should come equipped with parachutes, like any good drag racing cars?

The center piece of the whole festival, its “reason to be,” kicks off at 1:30: The Polish Day Parade. Yes, there’ll be plenty of Polish presence in the form of various veterans’ groups, dancing companies, and the like, but just like in the town it celebrates, there will be diversity, like it or not. Don’t miss the high-kicking Detroit Marching Band, a favorite of our boogieing Mayor.

Wind down afterward at 3 p.m. with a nice award ceremony: The 2nd annual “Good Egg Award” will be given to local businessman Greg Kirchner, husband of Library Director Tamara Sochacka, longtime member of the Block Club Association and tireless volunteer, who is often spotted at events around town, helping to document them with his cameras and video equipment. Read more about this award on the official website, www.hamtownfest.com.

Chuckle again through another pierogi eating contest, this time on the north stage, at 4:30. Music highpoints from closing night include Polka Floyd at 3 p.m. on the north stage, and The Contours at 5:30, Danny D at 7:00 and ? Mark and the Mysterians wrapping things up with their Saginaw brand of Tex Mex garage rock, all on the south stage. And, don’t forget Pub Crawl the Third (and Final).

The festival will feature many other fun asides, including a number of Hamtramck celebrity bartenders, commemorative street signs for sale, and more.

For more info, go once again to www. hamtownfest.com. And for goodness sakes, walk or take a cab if you’re “going for the gold.”

In drinking, I mean.

One Response to Hamtramck opens its doors for Festival fun