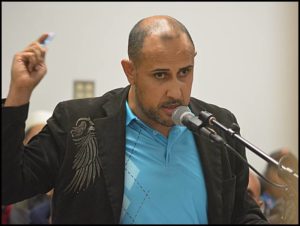 Community activist Ibrahim Aljahim has been charged with two counts of sexual assault.

Update: (Oct. 3, 2019) — As we were going to press Thursday, the Arab American News had an update on accused sexual assault suspect Ibrahim Aljahim, 37, of Hamtramck.
He was ordered by Hamtramck 31st District Court Judge Alexis Krot to wear an electronic tether during a probable cause hearing held on Oct. 3.
(The Review was unable to attend the hearing because it was preparing to go to press.)
Aljahim, a well-known community activist who is politically connected with local, state and national politicians, is accused of two counts of first-degree sexual assault on an 18-year-old male special education student at Oakland International Academy, located at Florian St.
He has pleaded not guilty to the charge.
Aljahim, a Yemeni-American, was a community liaison officer at the school. He has since been fired by the school.
According to the Arab American News, the Wayne County Prosecutor’s Office said Aljahim posed a flight risk, and requested an increase in his bond, but Krot declined the request.
Aljahim previously posted a $1,000 bond, and was told not to have any contact with the alleged victim or any witnesses.
(He was arraigned in Romulus on a Sunday when the Hamtramck District Court is closed. The Romulus court said Aljahim only had to post 10 percent of a $10,000 bond.)
The prosecutor questioned whether Aljahim is a US citizen. His attorney said that he is. That answer appeared to satisfy Judge Krot. The prosecutor also reportedly said that there might be two or three more victims or witnesses, all under the age of 16.
A preliminary examination is still scheduled for Oct. 10 in Hamtramck 31st District Court.

You can read more here:

By Charles Sercombe
A community activist and politically-connected Hamtramck man is charged with sexually assaulting an 18-year-old male student.
On Wednesday, the Hamtramck Police Department issued a press release saying that Ibrahim Aljahim, 37, is charged with two counts of criminal sexual conduct in the first degree. The department did not identify whether the victim was male or female, but the Wayne County Prosecutor’s office issued its own statement and identified the alleged victim as a male.
Media reports say that it involved a special education male from Oakland International Academy who was taken out of school, and then got into a car that Aljahim was in and was forced to perform a sex act.
Aljahim is a Community Liaison Officer at the school, located at Latham and Florian.
In the police department’s press release, Police Chief Anne Moise said “further facts and evidence will be presented in court at that time.”
The police department initially misspelled Aljahim’s last name in its press release as Algahim.
He was arrested Sunday, and arraigned via video through the 34th District Court in Romulus. (He was not arraigned in Hamtramck 31st District Court because the court does not conduct business on the weekends.) Aljahim posted a $1,000 bond to be released.
He also had to turn in his passport and was warned not to contact the victim or witnesses.
Oakland International Academy Larry Cowger issued a letter to the parents of the students saying that Aljahim is no longer associated with the school.
A preliminary examination is scheduled for Oct. 10 at the Hamtramck 31st District Court.
Aljahim can waive his right to the examination, in which case the matter will be heard in Wayne County Circuit Court.
If the examination takes place, it is like a mini-trial, where evidence is presented and testimony can take place.
Aljahim, a Yemeni-American, has been involved in local politics, and has hobnobbed with state and national elected officials and candidates.
He has previously identified himself as both a Republican and a Democrat when interviewed by The Review. Hamtramck has been a Democratic stronghold for decades.
In the 2012 presidential election, he told The Review he voted for Republican candidate Mitt Romney.
Asked why he voted for Romney, he said it was because “we need a businessman in the White House.”
The Review reached out to him for comment via his Facebook page, but as of Thursday, when we went to press, he had not yet responded.
He has also not responded to other media outlets.
On Aljahim’s Facebook page, he lists the following occupations and background information: Public Relations Coordinator at Yemen Sanaa, Community Liaison Officer at Oakland International Academy Hamtramck, Public Relations Officer at the American Human Rights Council, political and business consultant, and he studied criminal law at Wayne County Community College.
He also says he is from Madinah, Yemen.
Aljahim caused a stir in Hamtramck in 2015, when after a Hamtramck election that established a majority Muslim council, he was recorded at a rally saying: “Today we show the Polish and everyone else.”