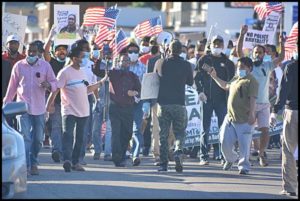 A rally was held last Sunday evening in support of the Black Lives Matter movement.

By Charles Sercombe
Hamtramck has joined the growing list of communities protesting police brutality.
On Sunday evening, about 100 people gathered in front of Alladin restaurant on Conant Ave. and then marched several blocks to Zussman Park, located in front of city hall.
During the walk, the crowd held signs and chanted what has become a standard refrain: “No justice, no peace.”
And because the most recent high-profile deaths of individuals at the hand of police officers were all African Americans, the chant “Black Lives Matter” played a significant role.
For about an hour a succession of speakers addressed the crowd. At times the rally turned into an anti-Trump campaign. 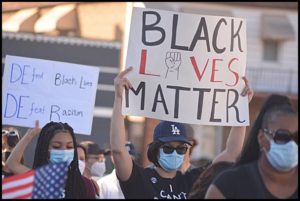 “The lesson from 2016 is that sometimes you have to take a clown seriously,” said former Hamtramck City Councilmember Kazi Miah.
Joining the speakers were local elected officials and candidates seeking the state representative seat that includes Hamtramck in its district.
Abraham Aiyash, who appears to be the lead candidate for the position, said that African Americans have long suffered, ever since they came over as slaves.
“For 400 hundred years, black Americans have had a knee on their neck,” Aiyash said.
He also advocated for the defunding of police departments, which has become a much talked about proposal, and diverting those financial sources into schools and low-income housing.
Councilmember Ian Perrotta got a loud round of applause for saying that this wasn’t a time for him to speak out.
“As a white guy in a position of power, my role is to shut up and listen,” he said.
Councilmember Mohammed Hassan said the deaths need to be addressed with a constitutional amendment.
“If you kill, you must be killed,” he said. 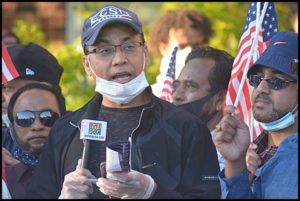 Dr. Nazmul Hassan, a member of the Michigan Bangladeshi-American Democratic Caucus, which sponsored the rally, speaks to the gathering.

Police Chief Anne Moise made a surprise admission about the recent death of George Floyd in Minneapolis, who died in custody while a police officer kneeled purposely on his neck.
In it, she also referred to the death of Breonna Tayler, who was shot to death while in her bed, when Louisville police officers burst into her apartment in a no-knock search that turned out to be the wrong apartment.
“I believe they were murdered,” Moise said. “And those who were there are also guilty,” she added, in reference to fellow police officers who stood by while Floyd was slowly asphyxiated.
Dr. Nazmul Hassan, a member of the Michigan Bangladeshi-American Democratic Caucus, which sponsored the rally, came full circle from Kazi Miah’s earlier comment on getting out the vote and defeating President Trump.
“We have to get the clown out of office,” Hassan said.
Posted June 19, 2020

One Response to Hamtramck rallies in support of Black Lives Matter