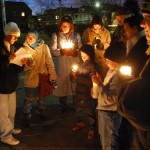 By Charles Sercombe
It may not have been the largest vigil Hamtramck has seen, but a gathering last Saturday evening packed a meaningful punch.
About 20 people took part of a vigil at Zussman Park to encourage world leaders to adopt a “real deal” on ending global warming. Hamtramck’s vigil was part of a worldwide happening to influence talks on global warming taking place in Copenhagen.
The vigil was organized by Sharmin Hakim.
“People of Hamtramck want a real deal,” Harmin said. “We need a deal that is ambitious enough to leave a planet safe for all of us and fair for the poorest countries that didn’t cause climate change but are suffering most from it.”